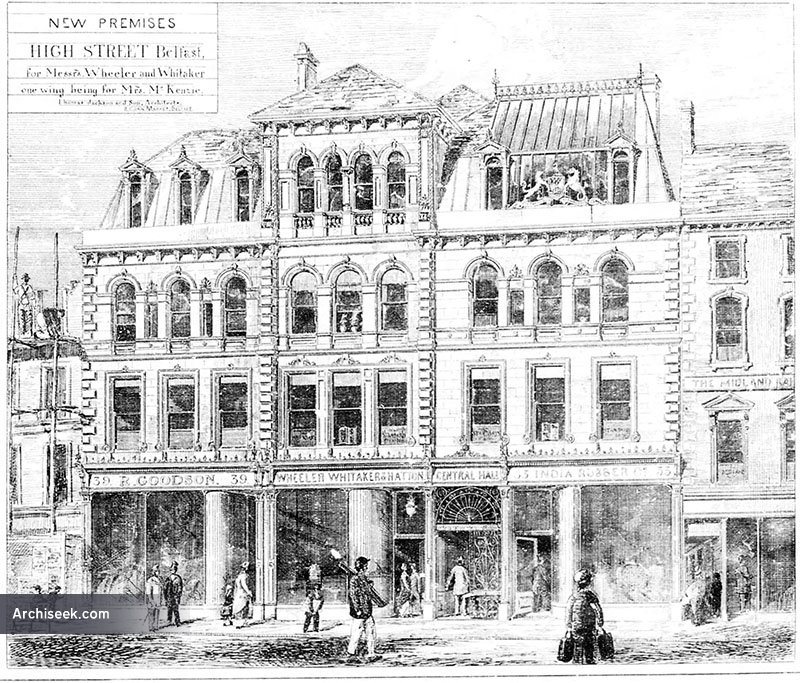 Originally built as a commercial building with several units and a large hall for public meetings. St. George’s Hall was also the city’s first cinema, and opened, “for animated pictures and high class variety entertainment”, on 17th August 1908. However, better equipped cinemas soon opened, and film shows ended in 1916. Later used for many years as the Ulster Sports Club and many boxing bouts were staged there. The lower hall has since been converted to a bar and restaurant.

“They have a frontage of about 62 ft. to High-street, with a depth of over 150ft. The eastern wing, which has been made to harmonise with the remainder, is the property of Mrs. MacKenzie. The residue has been erected for Messrs. Wheeler and Whitaker, the old established firm of apothecaries, who formerly occupied a portion of the old premises and are new returned to the new.

The front is divided into three shops, occupied respectively by Mr. Goodson’s mantle and ladies outfitting establishment; Wheeler, Whitaker, and Hatton’s Apothecaries Hall; and a branch shop of the Indiarubber, Gutta-percha, and Telegraph Works Company, of Edinburgh. Between the two latter, a spacious entrance and staircase leads first to the suite of offices above the shops and secondly, straight forward by a broad flight to the new “central hall” situated over a large restaurant, which covers the rear portion of the ground. The offices which are lofty and well lighted, are, several, of them, already taken up on leases…”

“….The remaining portion of the site behind the shops, as before mentioned, is occupied by a public hall, having two tiers of galleries over sides and end, and adapted for general entertainments, music , or about any purpose to which a public hall can be devoted. The ground floor has been designed for a restaurant, with bar, which mat or may not have any communication with the hall above and easy access is gained to it by Joys’ Entry, a public thoroughfare between High-street and Ann-street – both main street – which is now being flagged and otherwise improved by the town council.”

“The hall itself is on the first floor, the inside dimensions being about 60ft by 52ft., and, with its double tier of galleries, will contain seating for upwards of 1,000 persons, all ranged in a horse-shoe form round the stage of platform, about 27ft. by 16ft 9in.”