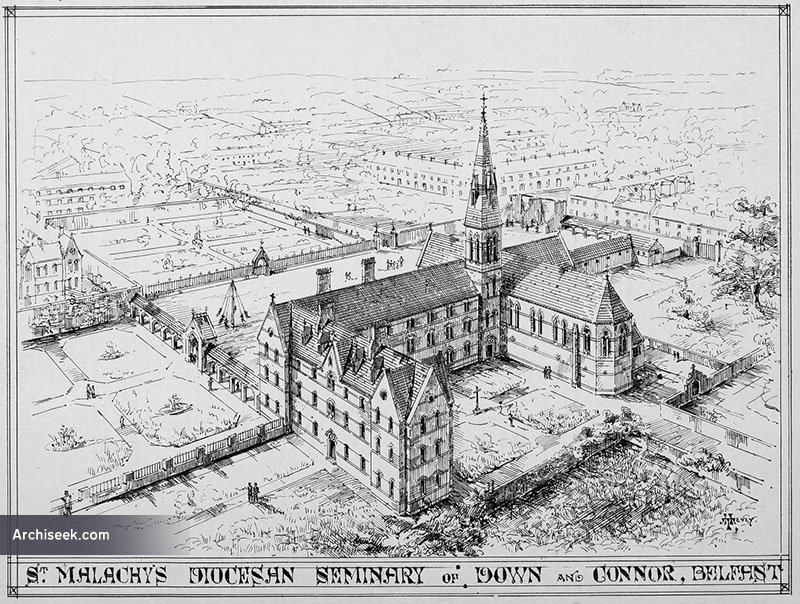 Constructed on the former Vicinage Park, just north of Belfast city centre. Constructed both as a school and a diocesan seminary, a model followed by many dioceses across Ireland. St. Joseph’s Seminary, the seminary for the Diocese of Down and Connor, was colloquially as “the wing” due to it being a wing of the college building. The building is now home to St. Malachy’s College. The building is finished in red brick, and has quite a stern Victorian institutional aspect to it. The intended spire was never completed.

“The illustration with this issue is a bird’s-eye view of the New Catholic Seminary in Belfast.

The grounds of the Seminary adjoin the Convent and Orphanage, and the three buildings form a most picturesque group, not only from the excellence of the buildings themselves, but also from their beautiful situation, being built on a considerable eminence which overlooks the town and portions of the surrounding country.

The Seminary has been rebuilt with special regard to the physical requirements of the occupants. The apartments are lofty and well lighted, with ample provision for ventilation and heating. The principal dormitories are 20 feet in height, and afford more than 1,000 cubic feet of space for each bed. There are three of these dormitories, affording sufficient accommodation for 100 beds ; lavatories and bath-rooms are attached, and each dormitory communicates with the bed-room of the master in charge, who thus has his pupils always under supervision. On the ground floor are situated the chapel, study-hall, and refectory, the latter provides seats for 150 persons. The principal entrance is under the tower (as seen in view), which runs directly opposite the entrance from the Antrim Road. Within the entrance is a vestibule communicating with the reception-room, staircase, and principal hall, beyond which is the cloister extending the whole length of the main building, and affording ample space for a promenade when the weather is unfavourable for out exercise.

The chapel has been richly furnished at an expense of more than ^300, and can accommodate over 200 persons. It is separated from one of the class halls by folding doors, so that it can for special public occasions be extended to seat 400 persons. The chapel wing shown in our illustration, and the belfry stage of tower have not as yet been carried out, but it is to be hoped that these works will soon be commenced, as they are essentially necessary to the completeness of the design.

There are extensive play-grounds and gardens, as may be seen in sketch, provided with every requisite necessary for the health and physical development of the students.

We understand that there are at present about 40 internal students or boarders, and about 120 or 130 externals. The teaching staff of the seminary is large and of unusual excellence, and under the personal direction of the learned President, the Very Rev. Richard Marner, to whom belongs, in a great degree, the credit of having raised the Diocesan Seminary of Belfast to its present position, by his zealous and untiring exertions.

The portions of the work already done were executed by Messrs. Byrne, at a cost of about £6,500, from Mr. O’Neill’s plans,