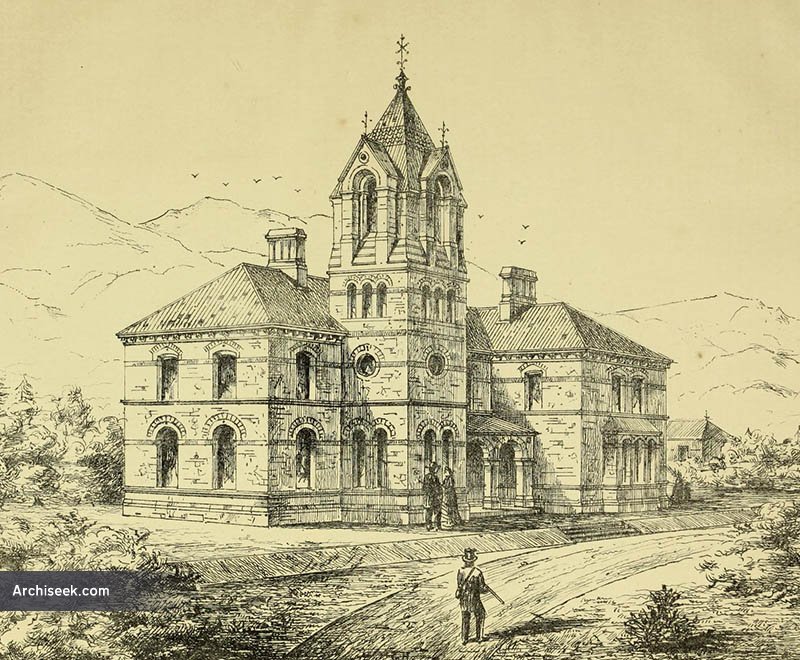 Never constructed on the site intended for it, opposite the old church of St. Conall on which Hevey also worked.

“Our illustration with this No., is of a house to be erected at the Glenties, Co. Donegal, for D. MacDevitt, jun., Esq., from the designs of Mr. T. Hevey, 16, Harcourt Street, Dublin. The house will contain, on the ground floor, drawing-room, dining-room, parlour, kitchen and the requisite offices; on the chamber floor there will be ample sleeping accommodation. A pleasing feature of the front, shown in our view, is the open porch, introduced between the tower and the projecting wing, as a shelter to the principal entrance, which is situated in the lower stage of the tower – a precaution rendered very necessary on account of the stormy weather prevailing in this highland district during the winter months. The materials with which the building is to be constructed are, the local limestone roughly punched for the walling, and cut stone for the dressings, which are to be of the simplest possible character. It is gratifying to witness the introduction of architectural buildings into a district (such as this portion of Donegal) where the houses are generally of the most unpretending character, invariably covered with whitewash – a very desirable thing from a sanitary but scarcely so from an architectural point of view.” Published in The Dublin Builder, November 15 1866.