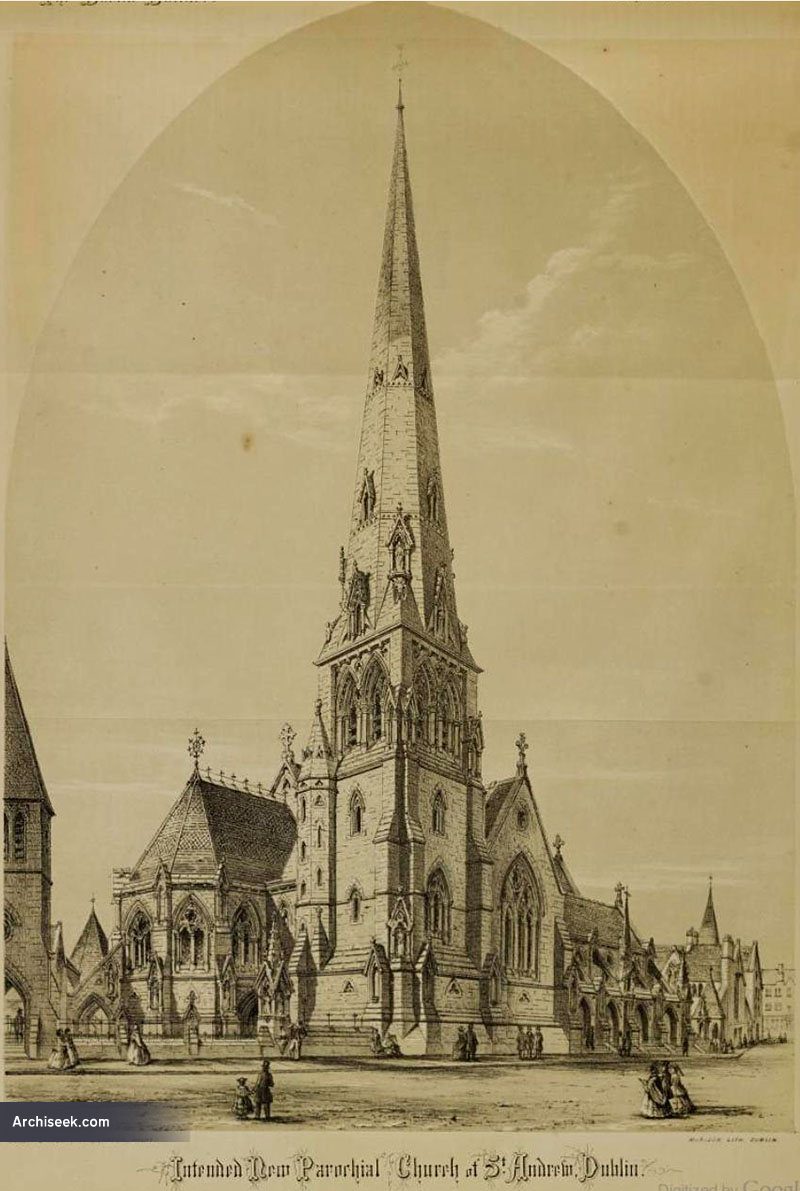 More expansive scheme than constructed to replace the church destroyed in a fire in 1860. This illustration appears to show the church (largely as constructed) with schools, hall and gateway all in a similar gothic style. The church decided to donate a strip of their land to the city to allow for a wider street in exchange for a grant towards construction of the church.

“As yet it would appear to a certain extent problematical as to whether the structure so designed will be carried out in its integrity or not, -some say not at all,—however we leave that question to be decided by time, but have seized the earliest opportunity in presenting the public with one view (at least for the present, though others are in our engraver’s hands) of what must be conceded by all to be a very noble and appropriate architectural work. A few words of description moveover, will prove acceptable. The plan is cruciform, with nave 83 feet long by 29 feet wide, apsidal chancel 41 feet by 28 feet, transepts (each) 25 feet by 33 feet, aisles 22 feet and 17 feet respectively, cloister porch, baptistry at south-west angle 14 feet wide, sacristy (under tower) organ loft, &c., &c. The tower, 80 feet in height, shown in the illustration will be in connection with the northern transept, nearly facing Church-lane, and be seen to its base to a considerable distance down Nassau-street ; and the spire with which it is intended to be sur mounted will attain an altitude of 175 feet to the vane, forming one of the highest of the few landmarks the city can boast of For the external features generally the perspective illustration, which is taken from north-east angle, is sufficiently descriptive, but we desire to note specially the cloister porch, which with its two entrance doorways and concomitant parts is excellently and picturesquely handled. The style of architecture is the early decorated of the 14th century. Internally the nave will be 73 feet to the hammer beam, have open timber roof stained and varnished, be separated from aisles by an arcade of four bays, with circular piers and pointed arches, and have clerestory windows over same. At the intersection of the transepts with nave are four great arches—springing from clustered piers, -one of which leads to chancel, which is lighted by 5 two-light windows, as seen on the illustration, and will have a stone groined ceiling. The aisle, stated to be 22 feet in width, will be carried up in A form, terminating in gabled ends, and the other have shed roof from about level of clerestory windows, forming a pleasing variety in the outline. The chancel will be floored with encaustic tiles, and no doubt hereafter the windows will be filled in with stained glass. The materials proposed to be employed through out are granite for the facing of general structure, and Bath stone for the dressing.”

“It will be in the recollection of our readers that the original design for this building by Messrs. Lanyon, Lynn and Lanyon, was of an exceedingly beautiful and ornate character. It was selected in competition as the best of many—several of them by architects distinguished for their attainments in ecclesiastical art, but, unfortunately, as is too frequently the case with competition designs, in order to suit their plans to the finances at the disposal of the churchwardens, the architects have been obliged to omit many attractive features.” The Dublin Builder, December 1 1866.