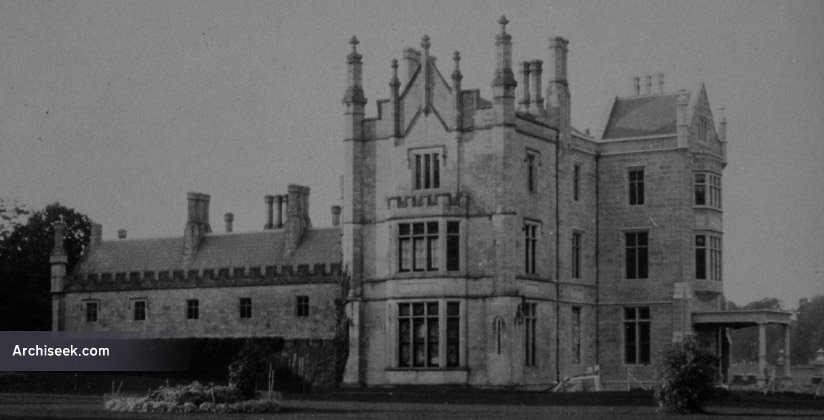 The story of Durrow Abbey House is framed by two fires. One in 1843 when the house was under construction destroyed the adjacent Georgian mansion and all the furnishings stored there, the other in 1923 meant the total destruction of itself.

Construction was underway in 1837 when Lewis remarked “The principal seats are Durrow Abbey, that of the Earl of Norbury, situated in an ample and highly improved demesne, in which his lordship is erecting a spacious mansion in the ancient style”. After the murder of Lord Norbury in 1839, work had largely ceased on construction prior to the fire of 1843. A contemporary newspaper article described it: “This magnificent abbey is nearly destroyed. On Saturday evening last, it took fire, and before assistance could be procured to arrest the progress of the flames the abbey was almost reduced to ruin. This noble structure remained in an unfinished state as the entire works were stopped immediately after the murder of the late munificent proprietor, Lord Norbury. The new building which was not completed, joined the old one, which it was intended to adopt as a wing by facing it with stone; in this portion all the valuable furniture was stored and this part of the extensive building is totally destroyed.” After the fire, construction continued and the building was completed around 1860. 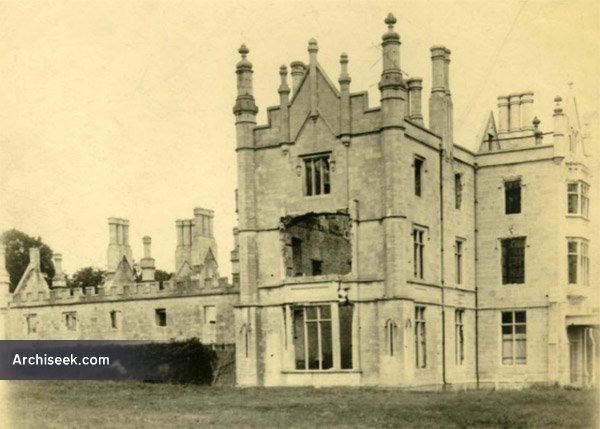 The house consisted of three storeys over a sunken basement, with an off-center three-storey entrance porch – a later porte cochere was added. Richly ornamented with gable end bay windows, tall chimney stacks and corner turrets, all of limestone. To the rear was a simple castellated service wing facing a sunken courtyard, two sides of which were bounded by a single storey range of stores.

In 1923, during the Irish Civil War, the house was gutted by fire, the roof collapsing, and the entire fixtures and fittings destroyed. It was rebuilt in the mid 1920s to designs by Ralph H. Byrne.