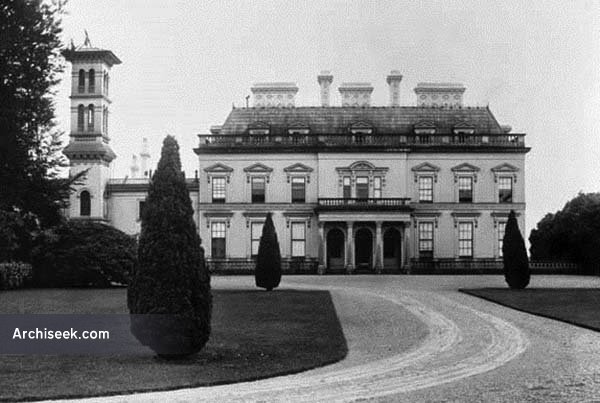 A 19th century mansion with the appearance of a French-Italianate château, with a seven-bay entrance front, the centre bay breaking forward, with a tripartite window above a single-storey, balustraded, Corinthian portico. At one side is a lower, two-storey wing, from which rises a campanile tower, with two tiers of open belvederes. Originally designed by Darley and constructed between 1828-32, an attic and a distinctive mansard roof were added 20 years later, and the stacks raised and embellished in the French style. The Italian style campanile tower with gilded vane was added later. The house was reduced in size about 1937 by its then owner, Captain Barton, the four bays of the main block furthest from the wing being demolished.

In the early 1990s it was transformed into a luxury hotel and leisure complex, the Kildare Hotel & Golf Club, known simply as The K Club. The house has been doubled in size, a large bedroom wing added, using a granite porch from Ballynegall in County Westmeath, to fuse the two sides together.