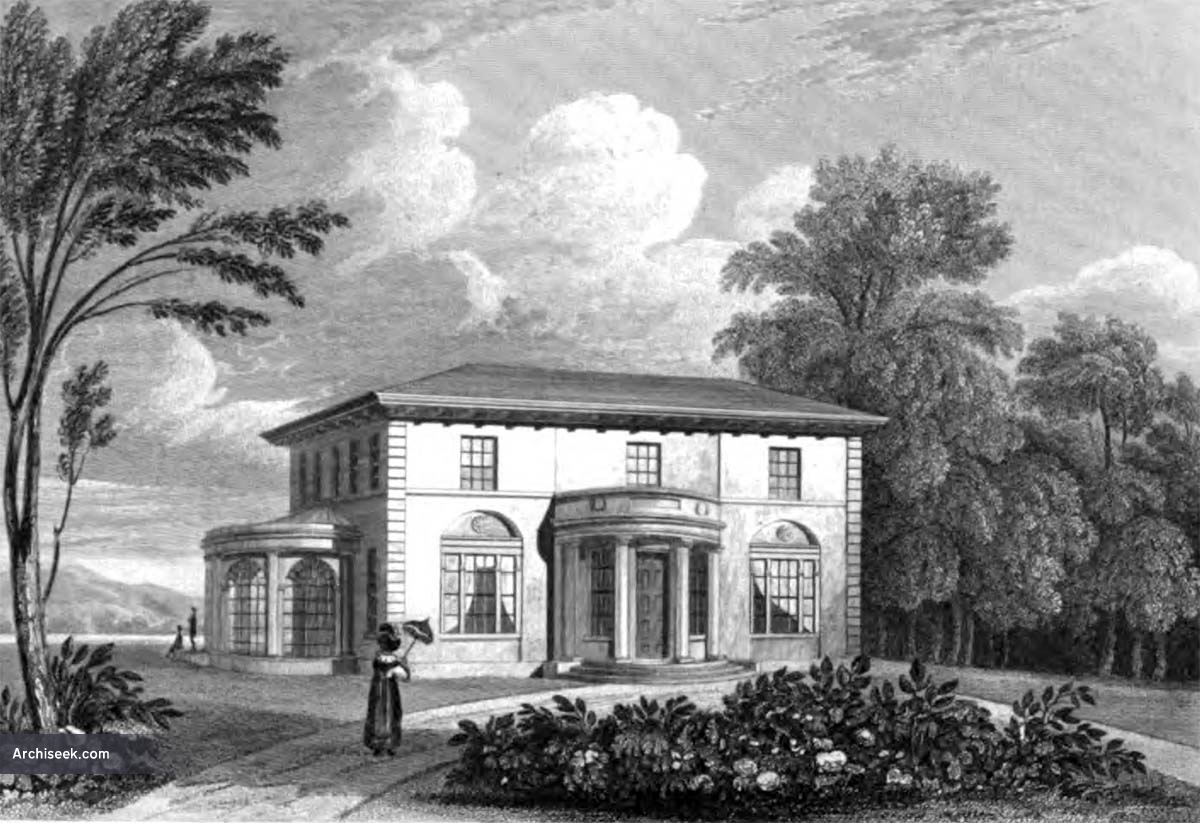 Constructed 1807-08 for Robert Delacour to designs by Sir Richard Morrison. Inscribed on the entablature over the entrance ‘est ubi depellata somnos minus invida cura’ from Horace Epistle 1.10. A deceptively large house, with two storeys over a full basement. House, furniture and contents destroyed in 1921/22. Rebuilt circa 1925 by Chillingworth & Levie with a second storey added to the curved entrance bow and without the conservatory.

From: J.P. Neale, Views of the seats of Noblemen and Gentlemen in England, Wales, Scotland, and Ireland, vol.V, London, 1821
“The House was built in the years 1807 and 1808, upon a plan of Richard Morrison, Esq ., and was executed under his special direc tions and frequent superintendence. In the higher and grand walks of his profession, especially as a Gothic architect, Mr. Morrison’s talents had been long acknowledged. In this instance, it was his avowed object to exhibit (in his native country) such a specimen of his taste and talents as a villa architect, that he might confidently commit his character with the undertaking, and refer to it as conclusive evi dence of his capacity for designing and executing a residence that should combine simplicity and elegance with a convenience and extent of ac commodation suitable to the purposes of a large family, or of affluent fortune, while it retained the modest character becoming the habitation of an unostentatious private gentleman ; and there is not, perhaps, an instance in the records of architecture, where the object has been more completely attained. Bear Forest is a residence suited to the peaceful retirement and en joyment of any rank or fortune. There is a wing attached to the House, which is so well contrived and so judiciously planted , as to be nearly imperceptible on the exterior ; and there is a yard connected with this wing, in which are necessary accommodations, arranged in the most compact order.

It is entered by a circular portico, built of a fine lime- stone, with . which that country abounds. The columns and pilasters are of the Doric order. On the entablature over the entrance is an appropriate motto , from Horace :
“ EST UBI DEPELLAT SOMNOS MINUS INVIDA CURA ? ”

The hall, of which the portico in fact forms a part, is correctly propor tioned and ornamented with stucco. The floor is of Portland stone; the appearance is light and elegant: the dimensions 16 ft . by 21, 16 feet high, with our columns of the Ionic order, two on ch side the entrance to each of the rooms on both sides of the hall. The principal staircase of Portland stone, is geometrical, of easy ascent, occupying a small space, and well lighted by a dome of cast metal. It has been greatly admired for its chaste and elegant appearance. It rises from a rear hall, which leads to the drawing and dinner rooms. The bedroom story is singularly compact and convenient, affording five excellent bedrooms, with two dressing-rooms. The entrances into those rooms are ornamented with chaste stucco work, which gives the whole a very light and attractive effect. The basement story is, probably, for its extent, not inferior to any that could be named. It is all vaulted , and floored with the best description of flag -stone.

There is a plentiful supply of water, from a pure spring, on elevated ground, contiguous to the house, which has been judiciously taken ad vantage of, and supplies by pipes the baths, &c . without trouble or interruption , and affords the comfort and convenience of having abundance of that necessary article at all times of the best quality. The exterior of the house is coated with Roman cement, in imitation of lime- stone, impenetrable to weather, and durable : the appearance is far preferable to any other covering yet known.”