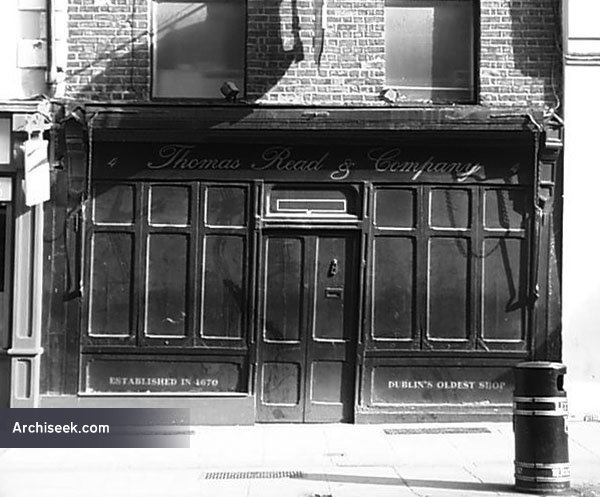 In response to and in clarification of RTE’s Morning Ireland coverage on 7th March 2014, the building’s owner has issued the following media release. Until its closure in 1997, Read’s was the oldest shop in Dublin, having operated at this address for 200 years. It has lain closed and crumbling since. The shop is believed to date from the late 19th century.

Sean Rothery described it in The Shops of Ireland as “one of the best preserved shops in Ireland. The interior is an Aladdin’s cave of knives and scissors and other articles of shining metal and is highly evocative of the period.”

“No 4 Parliament Street is a private property owned by a private individual who having acquired the building two years ago, wishes to restore the property to its original status as a cutlery shop and as a private home.

The owner’s interest is in the conservation of both the overall building and the original shop.

It is not to be developed nor refurbished beyond those works necessary for its conservation, no change of use is planned and the business is to be reopened.

The owner has invested considerable time and resources in the conservation and restoration of the building and shop over the last two years, including the following:

The appointment of a world renowned author to investigate and write on the history of the Read family, their business interests and the shop itself.
A senior archivist was appointed to archive thousands of the products and materials found within the building.
All works to date including the archiving have been photographed and filmed for future publication.

With regard to the issue of the building being closed to the public:

The building has been closed for almost 20 years.

The owner has appointed Kelly and Cogan Conservation Architects and has completed a considerable amount of conservation research into the building and over the last year. With the assistance of Dublin City Council, essential maintenance and repair works to the building have been carried out during that period. This work while not highly visible, is absolutely critical to the future of the building and shop and is ongoing.

Given the nature of the work it is expected that the building work will not be completed, subject to planning for at least 18 months.”