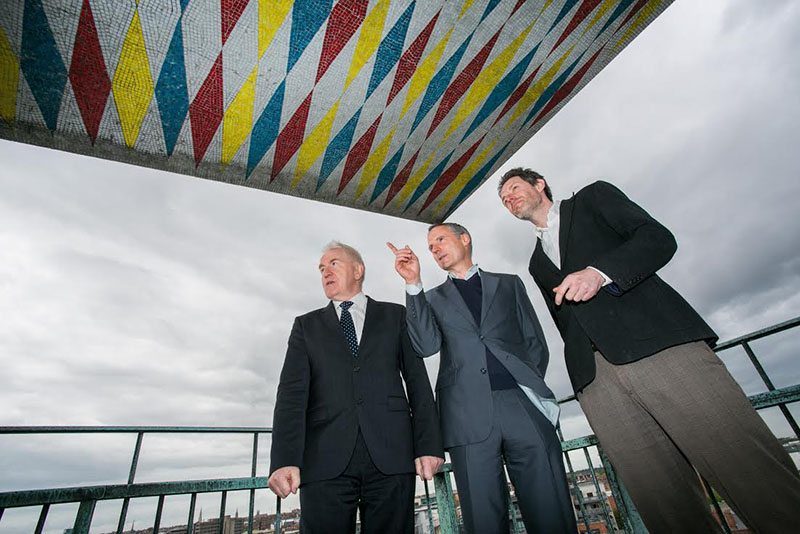 The Minister for Arts, Heritage and the Gaeltacht, Jimmy Deenihan T.D., today announced details of Ireland’s participation at the 14th International Architecture Biennale Exhibition in Venice this June. Busáras, Dublin was chosen as the location for this announcement as it is an iconic building of the past century and honours the memory of the recently deceased artist Patrick Scott, who worked on this build as a young architect and is generally accredited with the design of the mosaics on the cantilever style roof terrace.

Ireland’s entry for the 2014 exhibition has been commissioned and curated by John McLaughlin and Gary Boyd. The theme of La Biennale 2014 ‘Absorbing Modernism’ invites countries to look at the interaction between global modernisation on the one hand and local architectural cultures on the other. “Infra-Éireann looksback at the role of Irish architects in the design of everyday infrastructures such as hospitals, schools, roads and bus stations. It highlights the way that these architects contributed to the making of the cultural identity of modern Ireland, and it looks forward to the emerging field of data and the role that the profession can play in the ongoing absorption of modernity under globalisation” stated McLaughlin.

Speaking at the launch, Minster Deenihan said: “Contemporary Irish architecture has a global identity and reach. This exhibition, ‘Infra – Éireann’, provides a wonderful overview of the last 100 years of architectural development within Ireland. By highlighting iconic buildings such as the Ronald Tallon designed RTÉ Studios at Donnybrook, the Roseleven Telephone Exchange in Athlone by Noel Dowley, and the designing of bridges, interchanges and roads by Grafton architects, this exhibition tells the story of an Ireland emerging from the past and the foundation of the State, to the present day.”

The International Architecture Exhibition – La Biennale di Venezia – is the world’s most important international showcase for architecture and represents a unique opportunity to present and promote the strength of Irish architecture to a world-wide audience.