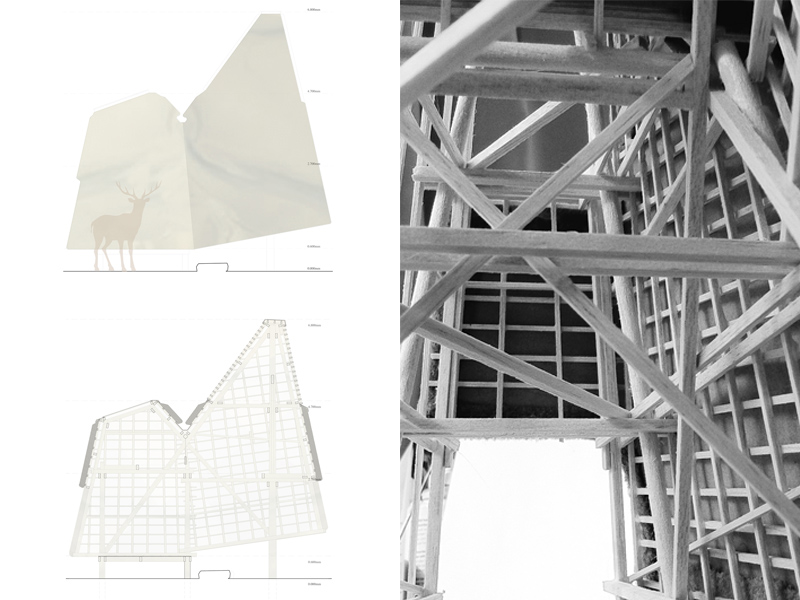 Donegal County Council Cultural Services Public Art Programmme and the Irish Architecture Foundation are delighted to announce the winner of the artscape @ ards architectural competition for the commission of an installation for Ards Forest Park, Creeslough, Co. Donegal. This commission is organised in partnership with Coillte and the Earagail Arts Festival.

The winning scheme ‘Jeffry’s House’ by totobArk, who are architect Thomas O Brien and artist Emily Mannion, is a folly made from thatch on a wooden frame, named after Jeffry’s Lough, a little known lake in the forest. The folly is a place of shelter, to sit in and look out to the mouth of the bay. This is the first architectural commission in a forest in Ireland and the vision is to demonstrate the exciting potential of asking architects to respond to an invitation to create unique interventions in the natural landscape. Donegal County Council, the Irish Architecture Foundation and Coillte hope to lead the way by initiating further commissions like this in the future.

Assessors Statement: ‘Jeffry‘s House by totobArk is a creative, refreshing, innovative and imaginative response to the brief. The concept displayed a strong aesthetic form, an intriguing architectural narrative, a great consideration to craft and an understanding of how it would all come together within the natural beauty of the Ards Forest. They gave us more than just an object on a site, and created possibilities for continual appreciation and inspiration, in a subtle and poignant way. In short O’Brien and Mannion created the potential for a magical conversation between the folly, the landscape and the public.’

Forty-three submissions were received and the assessors were impressed by the overall standard, this is an indication that there is great potential in the future for more installations in forests. The completed ‘Jeffry’s House’ will be launched at the Earagail Arts Festival on the 27 July 2014 at 3pm.