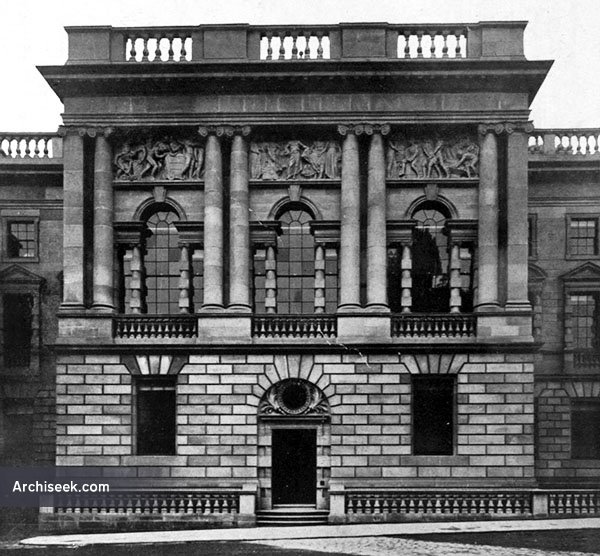 Lothian Chambers, formerly the Midlothian County Buildings, at the corner of George IV Bridge and the Royal Mile. Although only placed fourth in the competition to design the new building, architect James Macintyre Henry was chosen to carry out the project. There are three stunning ceremony rooms, the largest of which can take up to 110 guests.

“THE style of Mr. Macintyre Henry’s design adopted for these new buildings is Classical, of the period of the Later English Renaissance. The desire of the architect has been to produce a design of a dignified and monumental character, which, while harmonising with the buildings in Parliament-square and George IV Bridge, should yet have a distinctive character of its own, the elevations having a dignity and simplicity which make them worthy of this prominent and historic site in the centre of Edinburgh. The principal front is to George IV. Bridge. Incidentally it may be mentioned that there will be an open area right round the building — a necessity imposed on the architect in order to give light to the basement floors. The elevation to George IV. Bridge has a total frontage of 155ft.

This is divided into two blocks, the larger of which has a frontage of 120ft., and is three stories, or about 55ft., in height. This contains all the rooms necessary for the conduct of the county council business. In the smaller block, which is to the south of the other, is the justice of peace court-room, with police office below, its height being restricted so as not to interfere with the gable lights of the Signet library. The west facade of the county council block presents a varied outline, being broken up into three parts constituting a centre and side wings, the latter set back about 7ft. In the central block is placed the main entrance, which practically is on the street level. It is flanked on each side by double Ionic columns surmounted by a segmented pediment with carved tympanum, and a single window. Rising from a rustic base and passing through two stories are four Ionic columns in relief, which carry at the wall-head a projecting entablature and pediment filled in with carving.

This practically constitutes a handsome and imposing balcony. Behind, and showing between columns, on the first floor, are three single-light windows framed in Ionic pillars, and surmounted by frieze and pediment. On the floor above are three windows, with moulded architraves and sills. In the side wings are three single-light windows on each floor of similar design to those of the central block. The ends of the elevation are finished with two projecting pilasters rising through two stories, and the elevation is finished off with cornice and open stone balustrade. The elevation of the J.P. block to George IV. Bridge shows a large three-light window, flanked by pilasters and surmounted by a segmental pediment and stone balustrade. The frontage to the High-street is about 55ft. Its prominent architectural features are Ionic columns arid pilasters corresponding to the George IV. Bridge front, the intervening spaces being filled in with windows. The elevation to Parliament-square extends to about 105ft., and on this side the building is also three stories in height. The front of the basement is of rustic ashlar. The main feature of this elevation is the projection into the square, to the extent of about 20ft., of the central portion which contains the principal hall in the building— viz., the county council room, which rises through two floors. In the central part of this projecting portion, which is pushed slightly forward from what may be called its sub-wings, is placed the Parliament-square doorway. Over it on the first floor is a large and handsome three-light circular – headed window, with Ionic columns, cornice, frieze, etc. This is flanked on each side by two attached Ionic columns rising through two stories, and surmounted by a bold entablature and pediment with carved tympanum.

Each of the sub-wings has a similar three-light window, and the comers are relieved by double projecting pilasters. The wall space between the window-heads and the frieze is decorated with sculptured work. The side wings have each two circular-headed windows on each floor. Sited as it is on the George IV. Bridge front, the wall on this side is also surmounted by frieze and open balustrade. The committee were, it is under- stood, not only greatly taken with the elevation, but were pleased with the manner in which the interior had been planned to suit different purposes for which accommodation is needed. The principal entrance is in the George IV. Bridge front. This gives access to a large hall 40ft. by 30ft., around which are grouped various public offices, such as those for the collector of rates and his assistants, the medical officer of health, the J.P. clerks, the inspector of weights and measures and the chief constable and his deputy. On the north side of the entrance hall rises in three flights the principal staircase, about 20ft. in width. It is carried to the first floor only, and is finished at the landing by means of a triple Corinthian arcade, which forms a feature in the internal decorations. There is also a subsidiary stair immediately adjoining the entrance hall, which is carried from the basement to the top floor, and is intended mainly for the use of officials. From the main hall a corridor extends eastwards to the Parliament-square entrance, and running southwards to the justice of peace court room is a passage 8ft. in width. This court-room is 40ft. by 3Jft. by soft, in height, and adjoining it are witness rooms, retiring rooms for the justices, and all other necessary accommodation. Between the principal block and the J. P. court-room is a subsidiary entrance which can be used by the public and others frequenting the court, and which practically sakes the J. P. building independent of the other. on the basement floor, to which access is gained by the subsidiary stair already mentioned, are located rooms for the police and detective forces, a police sergeant’s house, record rooms, cells, etc.

This floor will be well lighted from the area. On the first floor, the landing of the main staircase is about 12ft. by 20ft. In it an open well is formed, with handsome stone balustrade, to give light to the hall below. Entering from the north side of the landing is the council-chamber, 4i}tt. by 30ft., amply lighted by the three-light window to Parliament-square, and by single windows on the north and south sides of the projection. It has been placed in this position so as to be away from the noise both of the High-street and George IV. Bridge. Its north wall will be 25ft back from the High-street front. Adjoining the council-chamber are rooms for the county clerk and his assistants, with waiting and cloak rooms, and a large committee-room, 20ft. by 20ft., which communicates direct with the council-chamber. This committe -room is on the east corridor. On the opposite side of the corridor, and overlooking George IV. Bridge, is another committee-room, 30ft. by 20ft, a writing room, 20ft. by 21ft., and a spare room ; while overlooking the lane between the county building and the Signet library is lavatory accommodation for the whole floor.

A feature will be made of the treatment of the interior of the council room. The walls will be relieved by means of pilasters, flanking the doors and windows. They will be panelled with wood to the height of 15ft.: there will be a handsome cornice, and the roof will be coved and elaborately panelled. The staircase and landing will be lighted from the top by a circular cupola, with doomed and panelled ceiling.

The ceiling of the first-floor landing will be divided into panels, five of which will be filled with stained glass, while other four will be utilised for ventilating purposes. On the second floor are rooms for the road surveyor and the sanitary inspectors, the caretaker’s house, two spare rooms, and lavatory accommodation. There will be a lift, rising from the basement to the top floor. The total cost of the building will be £40,000. A beginning with it will be made in the spring, and the work will be continuously prosecuted until finished, which will be in about two or three years.” Published in The Building News.