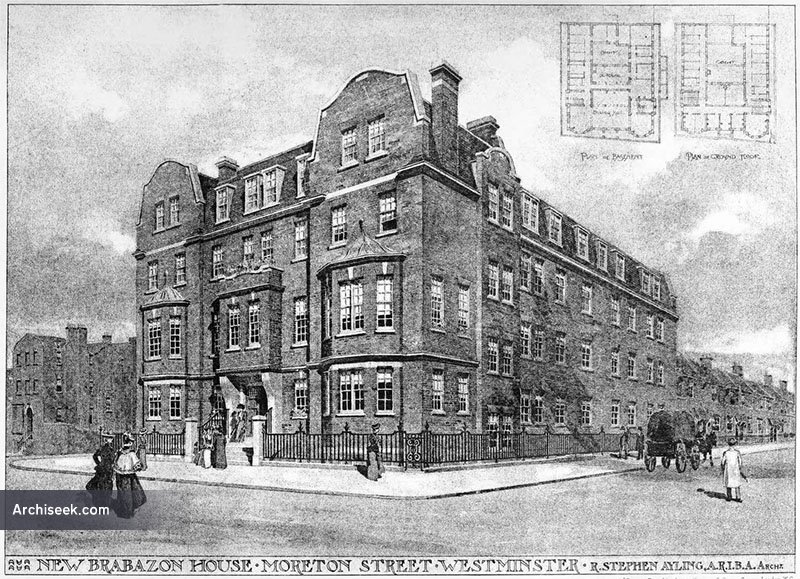 The building now in course of construction at Moreton-street, Pimlico, is intended for the housing of ladies with very limited means. The lease of the existing establishment in South- crescent, Bedford-square, having nearly expired, a small company has been formed to erect and equip the new building, among the members being Lady Meath, Mrs. Hopkinson, Lady Tate, and Lady Kelvin. The site was chosen on account of its central position, being equally accessible for ladies engaged in the various parts of London. The lower ground floor consists of a largo dining-hall capable of seating ‘.10 persons, with servant’s quarters and the usual domestic offices. On the ground floor are the offices and rooms for the lady superintendent (Miss Lindsey), whilst the wings arc divided into private bedrooms and cubicles for the residents. On the first floor, facing Moreton-street, are three large sitting-rooms, and the remainder of this floor, together with the two upper ones, are occupied by sleeping apartments for residents. Altogether the establishment provides accommodation for 89 ladies, 40 in private bedrooms, and 49 in cubicles. The materials are stock bricks with red brick facings to the three frontages, and stone dressings. The’ contractors are Messrs. Hough and Co., of London, whose estimate was accepted at the sum of £11,384, whilst among the sub-contractors are Messrs. Mark Faweett and Co., for floors and steelwork. The architect is Mr. R. Stephen Ayling, F.R.I.B.A., of Westminster, and the quantity surveyor Mr. Henry Riley, of Victoria-street.