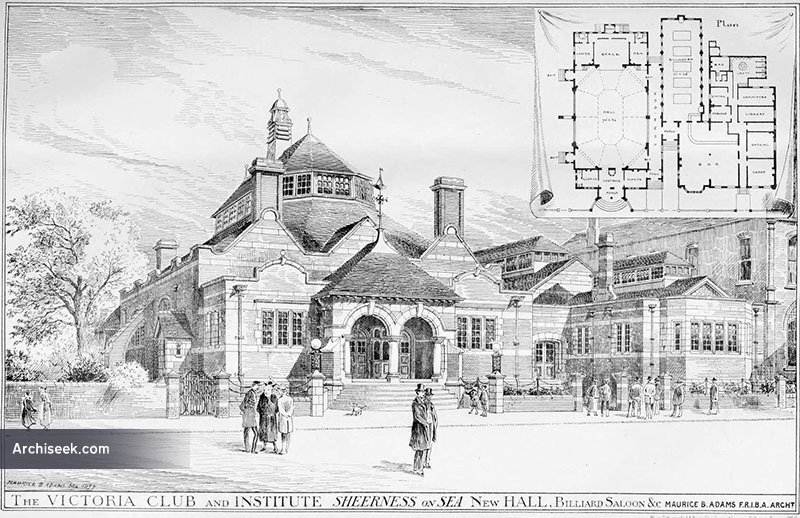 Unbuilt proposal for an extension to an existing social club. “The accompanying illustration shows the new assembly-hall and billiard-room fur five tables, also the extension of the club premises, which is situate in The Broadway, Sheerness-on-Sea. The institution has been established for many years, and with its large and increasing number of members has outgrown its old building. The contract now in hand will more than double the present bar accommodation, and the existing billiard-room, which is on the first floor, will he used as a reading-room in future. The large hall, when finished, will seat 600 in the body of the room, and its stage is designed for theatrical performances, with retiring-rooms and accommodation for scenery in a dock below. The great feature of this hall is its octagon-shaped roof, with arches of equal spans surmounted by a continuous girder and cornice. The floor space is rectilinear, and the span is fifty feet. To avoid the necessarily ugly outline of such a roof, if carried out to the end.^, where an unmanageable sort of pediment would be presented to the street, the architect has adopted octagonal terminations, and in this way the acoustic properties of the hall are increased, while an architectural character to the interior is obtained by simple, bold, and constructional methods. The proscenium of the stage is formed by one of the before-mentioned arches, and steel ribs resting on the intervening piers form the principals of the roof, and carry the lantern, which is terminated by a lead-covered turret, enclosing an exhaust ventilator. The exterior of the work is faced with red bricks and stone, the porch and doorways being entirely of Portland stone. Messrs. Johnson and Co., of Wandsworth, are the builders of the work already in hand. Mr. Maurice B. Adams, F.R.I.B.A., is the architect.” Published in The Building News, February 24 1899.