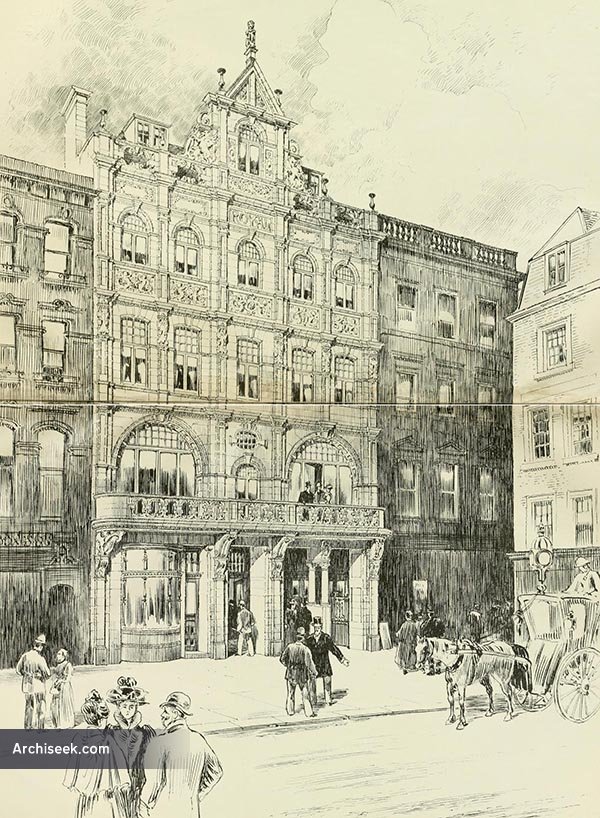 Originally opened as Weston’s Music Hall on 16 November 1857 at 242-245 High Holborn. The theatre was renamed the Royal Music Hall in 1868, and then changed names again in 1892, becoming the Royal Holborn Theatre of Varieties. This was to have a successful but short career as a Variety Theatre. In 1896 the building was sold at auction along with the public house next door, the former ‘Six Cans and Punch Bowl’ Tavern for £40,500. The new owner rebuilt the frontage to incorporate both buildings to designs by theatre architect Ernest Runtz. In 1906, the theatre auditorium was remodelled by Frank Matcham at a cost of £30,000, and was renamed the Holborn Empire. The theatre was closed as a result of an unexploded time bomb near the stage door, during the Blitz on the night of 11–12 May 1941. The building was hit the following night by another bomb and too badly damaged to reopen. It was finally pulled down in 1960.

“The Royal Music Hall has been a landmark in Holborn for many years. Originally known as Weston’s Music Hall in the old days, it was enlarged and remodelled by the then owner, Mr. Purkiss, who successfully carried on this most popular house of entertainment. Eventually the property passed into the hands of Mr. John Brill, who, immediately upon obtaining possession, decided to effect drastic alterations in the approaches to the building and generally to improve the accommodation for the public. An entirely new front of terracotta has been erected, embracing not only the original approach, but the adjoining property. No. 243, High Holborn ; the entrance-hall has been made larger, new staircases built, and also a spacious saloon, with ample lavatory accommodation. The auditorium also has been redecorated ana reupholstered , and a so-called bijou restaurant upon the upper floors arranged, capable of dining upwards of 80 persons. The remodelling of the Royal has been carried out from the designs and under the superintendence of Mr. Ernest Runtz, architect, of No. 10, Walbrook, E.G.” Published in The Building News, January 7 1898.