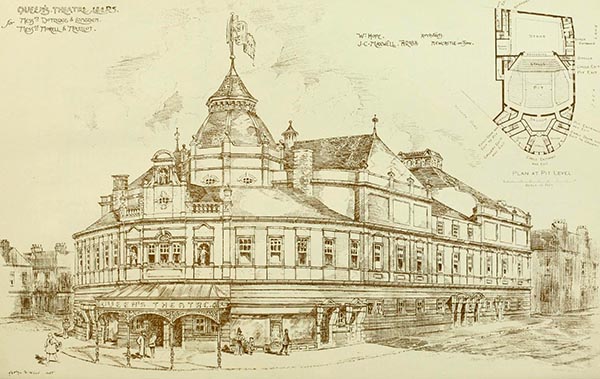 The Queen’s Theatre auditorium could accommodate 3,500 people, and as reported in the Leeds Mercury, ‘the interior decorations, and the appearance of the theatre will be found not only handsome, but essentially artistic, tasteful, and grateful to the eye.’ The building also contained refreshment rooms, sixteen drawing rooms, and two shops. The Queen’s could not compete with the cinema, however, and it closed as a theatre in 1924. It was converted to a cinema but numbers continued to decline. After the war, audience numbers were further reduced by competition from television. The Queen’s theatre closed in 1957, and was demolished in 1968.

“This new theatre .at Leeds is being erected for Messrs. Morelland Mouillot and Messrs. Dotridge and Longden. The builder is Mr. S. F.Davidson, of Newcastle-on-Tyne. The building now in course of erection is situate at the corner Meadow-road and Jack-lane, and will be faced with red bricks and atone dressings. The accompanying plan shows the arrangement of the building. The dimensions are as follows : — From curtain to back wall of pit, 72ft. ; width of auditorium, 78ft. ; stage, from curtain to back wall of stage, 41ft. ; four exits are provided from the pit ; three irom the gallery, and two from the dress circle. The plan has been arranged so that one pay-office serves for the whole of the house, and the theatre will hold about 4,000. The contrivance of the frontage, so as to provide for shops, is very ingeniously managed. Messrs. W. Hope and J. C. Maxwell, of Newcastle-on- Tyne, are the architects.” Published in The Building News, February 4 1898.