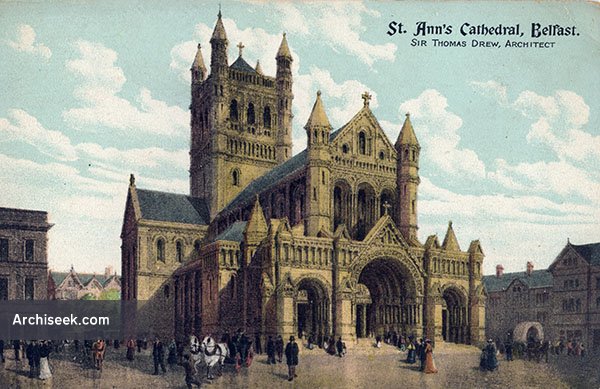 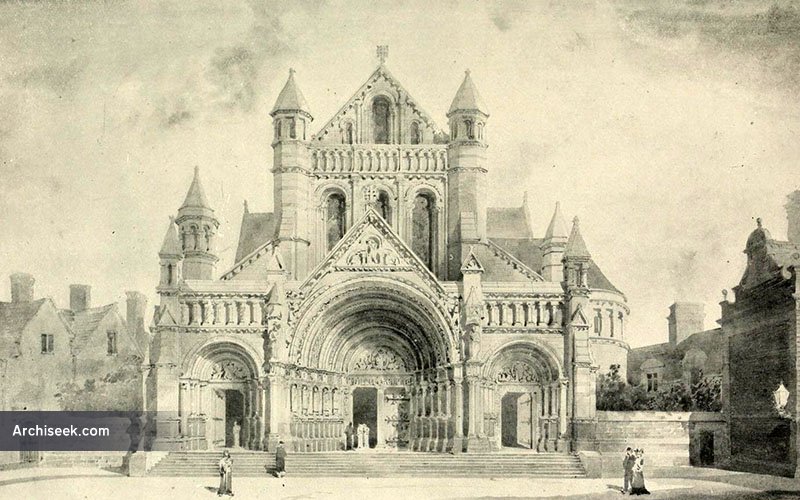 Design for St. Ann’s Church of Ireland Cathedral in Belfast by Sir Thomas Drew. Drew’s second scheme, the first being Gothic. This forms the basis of the current cathedral with some incomplete design elements – the tower, and the entrance porch. Illustrations of the intended design appeared on postcards for many years.

“Progress is being made with the new Protestant cathedral, the foundation-stone of which was laid on the 6th inst. by the Countess of Shaftesbury. The architect is Mr. Thomas Drew, R.II.A., F.K.I.B.A., of Dublin, a native of Belfast, acting in conjunction with Mr. W. H. Lynn, H.U.A., of Belfast. The original proposal was to adopt the Gothic style for the building, and in 1896 Mr. Drew submitted a design of this type ; but owing to the limited area of the site and the lack of funds, the committee adopted a Byzantine treatment on the recommendation of Messrs. Drew and Lynn. A conspicuous feature of the completed church will be a west front in Donegall-street, which, however, will not be built at present, except in part. The nave and aisles will accommodate about 2,000 people, and the completed cathedral about 3,000, A contract for the erection of the first portion of the building has been entered into with Messrs. Laverty and Sons at a cost of £10,384, and the estimated total cost of the completed cathedral is £70,000, including a central dome or tower, with the belfry to contain the peal of bells costing £2,000, which Mr. W. Gibson, of the firm of Messrs. Gil son and Co., Limited, has offered to present. The plan shows a nave 40ft. and 121ft. in clear length, divided from north and south aisles of 20ft. span by circular shafts into six bays, and a crossing, transepts, and chancel each with their piers and spams of 40ft. The internal height of the aisle walls is 46ft , and of the nave and its clerestory 72ft. The treatment is round arched Romanesque, of the type seen in the South of France. Eventually the crossing is to be covered in by a great dome or central tower. The west facade will have a lofty central portal inclosed in a receding series of arches five in number. The main gable and its staircase turrets will rise to a height of 105ft.” The Building News, September 22 1899.