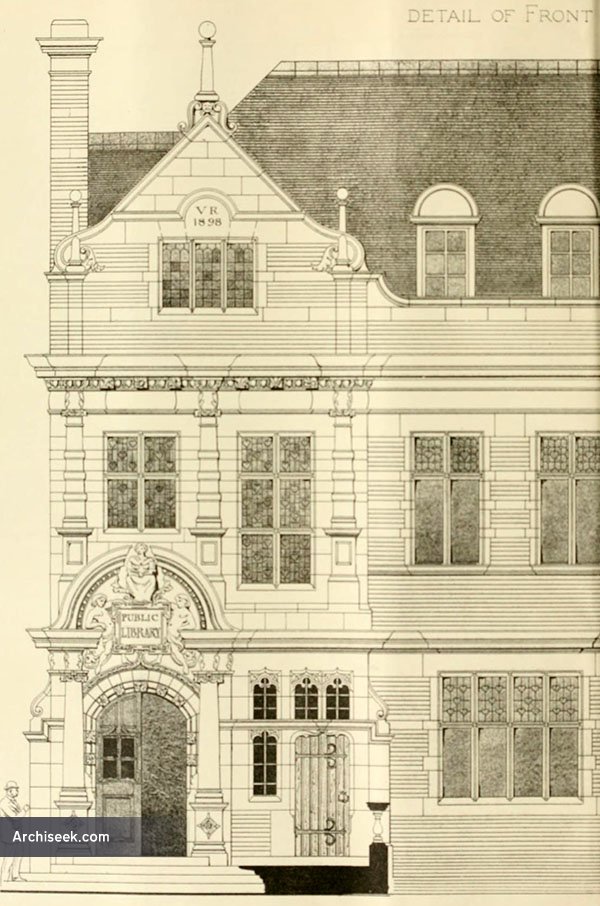 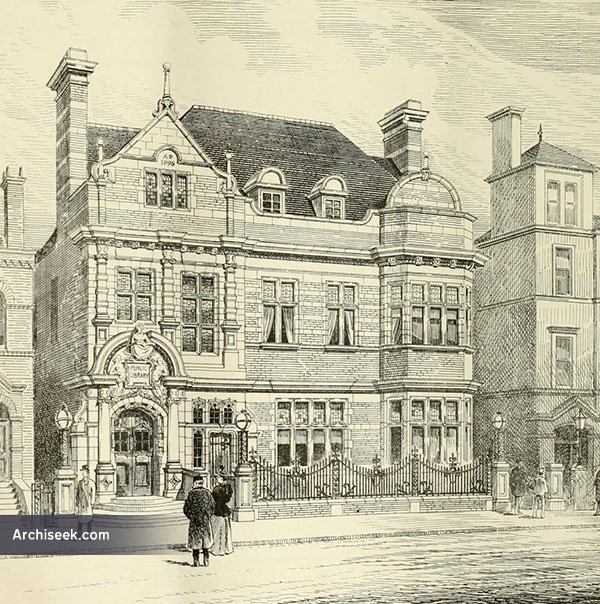 Putney Library is a Grade II listed building, and built in 1899, to designs of architect was Francis J Smith. It was paid for by George Newnes, and the balcony has an inscription in raised lettering “NEWNES PUBLIC LIBRARY”.

“The site for the public library at Putney is in the Disraeli-road, near the post-office, and the frontage facing this thoroughfare is comparatively narrow, situated between some very ordinary semi-detached villas of unimportant elevation. All the public rooms of the new building are necessarily arranged on the rear part of the site, which has a right-of-way approach by the side of the back premises of the houses in the High-street. The elevation of the new library buildings, therefore, in consequence of the peculiarities of the site and its surroundings, hardly gives an idea of the extent of the premises, while the location of the librarian’s residence in the part towards the street imposed a somewhat domestic character as the most suitable treatment of the facade. The public entrance to the library proper afforded the only fitting opportunity for the display of a feature somewhat in scale with object of a public building and the position of this entrance on the plan, leading by way of a direct corridor into the middle of the public departments at the back, left no choice.

The accompanying drawings, by Mr. Maurice B. Adams, F.K.I.B.A., were submitted in a limited competition recently held. The large committee-room shown overlooking the forecourt is of the size required in the instructions given to the architects, and the basement below, caused by the pair of houses originally standing on the site, is utilised for storage rooms and a heating chamber. The plan explains the scheme of the design, which is contrived to insure a perfect supervision, the administrative department being kept entirely distinct from the public rooms. The porter’s entrance is separated in the most complete way from the librarian’s private door, and the residences provided for these two officials are in no way connected, so that the families of both parties, each of a different social standing, are not brought into daily contact — a consideration of the utmost consequence for the satisfactorily working of any public institution of this kind. The rear building had to be planned within specific figured dimensions furnished by the committee, and the relative areas of the various rooms were also thus determined. The detail drawing given with the view illustrates the main entrance part of the front. Over the portal a seated figure of “Literature” is shown. The work of the library at Putney has for some years been carried out in the house with a tower to the right of the perspective incorporated in our double-page illustration.” Published in The Building News, December 16 1898.