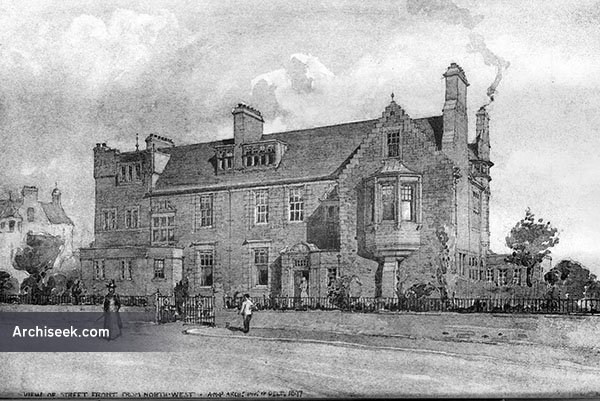 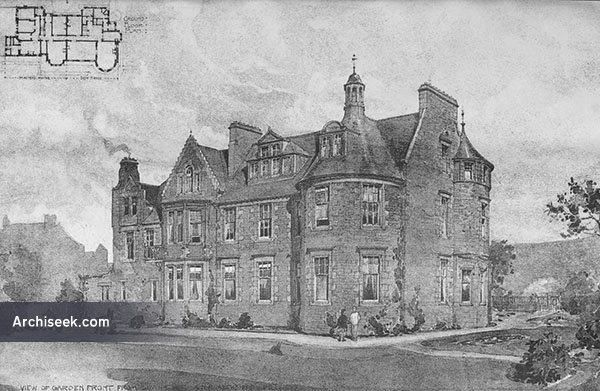 “The two houses, one of which is illustrated, are being built by the Edinburgh Academy to provide boarding-houses in connection with the Academy school. They occupy an admirably open situation, looking across the new playing-fields, and beyond commanding a magnificent prospect of Edinburgh. They are built of red stone in two colours, the walls being of Corncockle, the dressings of Locharbriggs, and roofed with Elterwater slates. While identical in plan, they are reversed from east to west, so as to bring the two kitchen wings together, an arrangement which also gives variety of outline to the two houses when seen from any one point. To give further interest and individuality to the respective houses, certain variations in the treatment of the gables and other details have been adopted.

They measure roughly 100ft. by 1Oft., and are three stories in height, with a basement at one corner, the masters’ rooms lying at one end, and those of the boys at the other. I’he masters’ wing of the house communicates, upon the ground and first floors with the boys’ wing, and contains a dining-room, drawing-room (with balcony over- looking the field), and .study, five bedrooms, two bath-rooms, the kitchen and offices, pantry, laundry, servants’ hall, and servants’ bedrooms.

The boys’ wing of the house contains upon the ground floor an entrance-hall, a large diningroom, a reading-room, study, music-room, and matron’s room. An annexe upon this floor contains a boot-room, a lavatory, and a dark-room for photography ; and in the basement a coal- cellar, a furnace-room, and a drying-room. The first floor contains five boys’ bedrooms, and two bath-rooms. The top floor of the house contains two boys’ bedrooms, a bath-room, and, next each other, the matron’s bedroom and a sickroom. The average cubic air-space assigned to each boy in the bedrooms is about 900ft., and in all points of sanitary arrangement and convenience the plans have been very carefully considered. The architect is Mr. Alexander X. Paterson, of Wellington-street, Glasgow.