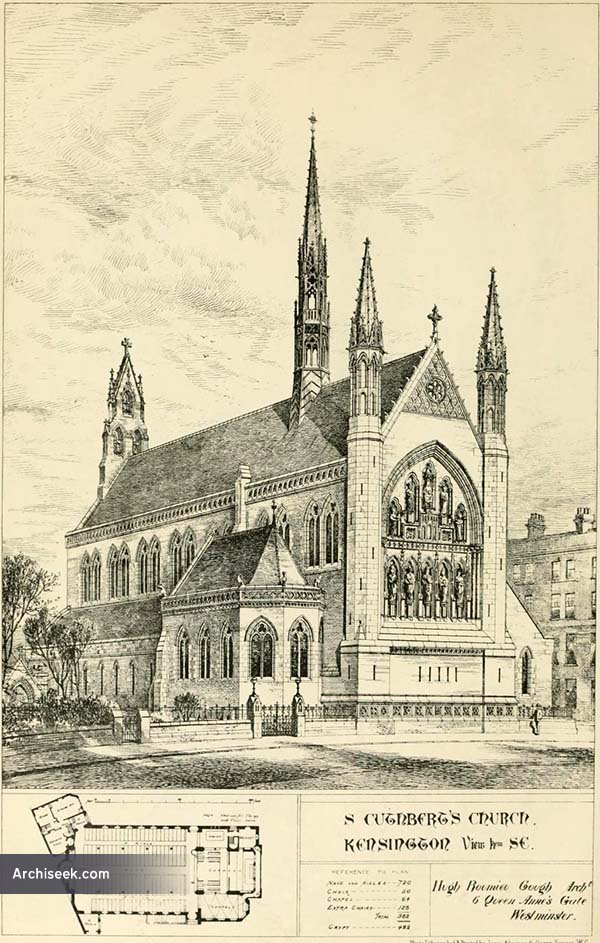 The church was built in 1884-7 by the architect Hugh Roumieu Gough. The exterior is in red and black brick. This project is now complete he church is remarkable for its interior, which is very ornate in the Arts and Crafts style of the late Victorian and Edwardian period. Many of Gough’s original fittings have survived, amongst them the pulpit (1887), the rood screen (1893) and the stations of the cross (1888).

“Our illustration shows an exterior view of a church to be built in Philbeach Gardens, Kensington. The walls are of concrete faced with brick, terra-cotta being used extensively throughout in lieu of dressed stone. A crypt will be formed beneath the greater part of chancel, nave, and aisles, the gravel of which the site consists being excavated and used in concrete for the walls. The crypt will form a temporary church, with accommodation for about 500 worshippers, whilst the main building is being erected. It will also contain vestries for clergy, and a choir and mortuary chapel ; afterwards it will be available for parish meetings, &o. The church will accommodate about 1,000 persons, will consist of a nave 91ft. Gin. by 28ft. (with a baptistery at the west end), north and south aisles of a similar length, and each 12ft. 9in. wide; chancel -lift. Cin. by 2Sft. ; morning chapel, 32ft. by IGft. Cin. ; a sacristy and organ bay. The height from nave floor to the ridge will be 72ft. ; the apex of the fleohe will be about 1 JOft. from the ground-line. The east wall of chancel will be without a window, but will be enriched with figure subjects, in niches within a bold and lofty arch. The figures in the upper tier will be Christ enthroned, in the centre, the Blessed Virgin, St. John, and two censing angels. In the lower panels, St. Cuthbert (the patron saint) in the centre ; and the four great doctors of the Western Church, SS. Gregory, Ambrose, Jerome, and Augustine, in the remainder. Below these a passage-way be- hind the altar is formed, communicating with the morning chapel. A elergy-house will be attached to the church at the north-west angle. The patronage is intended to be vested in five trustees, viz: — Canon Liddor, Canon Thynne, the E jrl of Strathmore, Lord Coleridge, and the ll<:n. C. L. Wood. Mr. Hugh Roumieu Gough, 1".R.I.B..\., of C, Queen Anne's-gate, is the architect employed." Published in The Building News, October 14 1881.