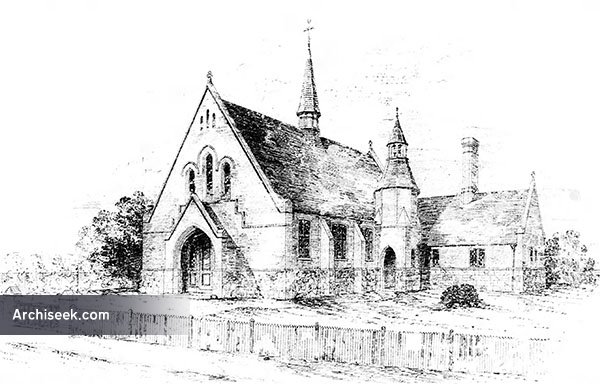 Irish-born architect who was articles to Alfred G. Jones before moving to London, where he had a long career. His only recorded work in Ireland is this parochial hall in Novara Road, a commission which was won in competition. His London works include hospitals, schools, and thirteen stations for the City and Southwark Subway. No longer in use as a public hall, it was for sale in 2014.

“The newly-erected hall situate at Novara-avenue, Bray, is the subject of our illustration with present number. It supplies a want long felt in this rapidly improving township, and within its easily accessible and commodious interior, lectures, concerts, public meetings, etc., can be most conveniently held. The building has been admirably designed in every respect, due attention has been paid to secure for it perfect acoustic properties, so essential when used for speaking or singing. The hall proper is 60 ft. by 25 ft. 6 in. with massive open-timbered roof. At southern end is a raised platform, over which is a handsome memorial rose window filled with stained glass. At the opposite or entrance end, and over the porches, is a gallery, which adds greatly to the appearance of the hall, whilst it much increases the perfection of its acoustic properties, by breaking the waves of sound and relieving it of unpleasant echo. In close proximity to the hall is a library with large bay windows and in connection are cloak rooms, lavatories etc., with spacious lobby and separate side entrance.

The heating is effected by an arrangement of hot air tubes, satisfactorily carried out by Mr. John Grandy. The materials used in the building are — granite from the adjacent Dalkey quarries, for a 6ft base, and the walling is of red brick; the high pitched roof is covered with red tiles. At western side, over a porch, is a bell turret with octagonal tiled roof; and in centre of principal roof is a ventilating fleche — these add considerably to the picturesque appearance of the edifice, with its handsome gates and oak paling.”