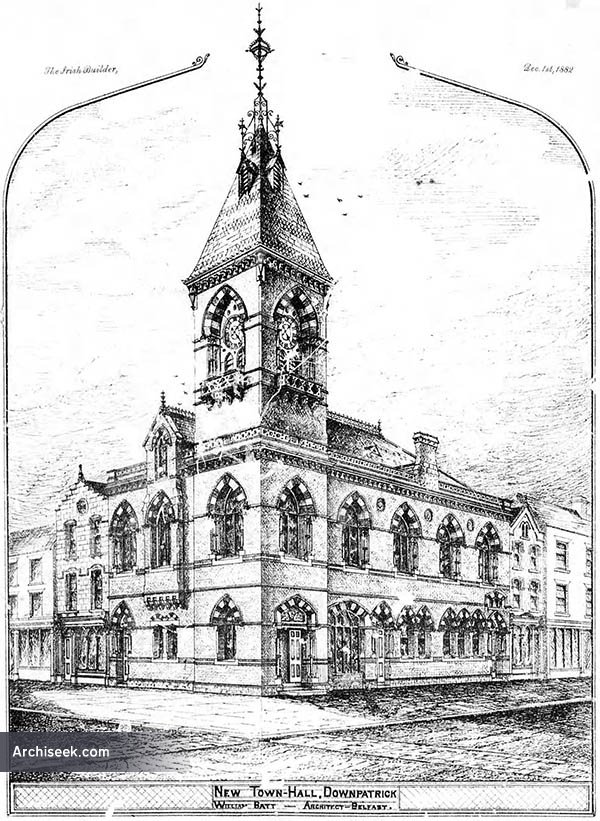 Quite a dour brick structure in a Gothic style. Constructed on the site of old market house and assembly rooms. Gothic. Erected for and paid for by local MP John Mulholland. Now the Downpatrick Arts Centre. Published in The Irish Builder, December 1 1882.

“This building, together with the new shops, occupy the site of the old Market House and Assembly Rooms at corner of two streets. The main building on ground floor consists of large and lofty public and private offices, and a strong room for the agent of the estate, also shop, corridor, vestibule, and staircase to large hall. In each street a commodious shop and dwelling-house fills up extra ground.

Through vestibule in base of tower, and by easy staircase the large hall is reached; it is 59 ft. by 86 ft. exclusive of a wide gallery at outer end over staircase, and to centre of ceiling is 243 ft. high. At other end will be a platform with ladies’ and gentlemen’s retiring-rooms off same, and another in tower under gallery. The roof of large hall will be half open, having wrought principals and meat open spandrils under, springing from stone corbels, and a sunk and perforated wooden cornice carried round walls, and ceiling will be divided into panels and have ornamental centres; proper attention will be given to sanitary matters. The exterior is faced with best red perforated brick from Belfast, with some black ones in arches. The columns with their carved caps and moulded bases, main cornices, and parapet, are executed in cut stone from Dumfries quarries. A clockwill be fixed in tower, having four dials each 4 ft. 6 in. diameter, and large louvre opens will be provided to let out the sound of bell.

The contractors (Messrs. Dixon and Co.) are pushing the works forward with their usual rapidity, and will in a short time have the roofs completed. The buildings are being erected for John Mulholland, Esq., M.P., who is paying the whole cost of them, and when finished they will form a useful and prominent feature in the town. The plans and specifications were prepared by Mr. William Batt, jun., of Wellington place, Belfast, and he is also superintending the erection of the building, Mr. John Orr acting as clerk of works.”