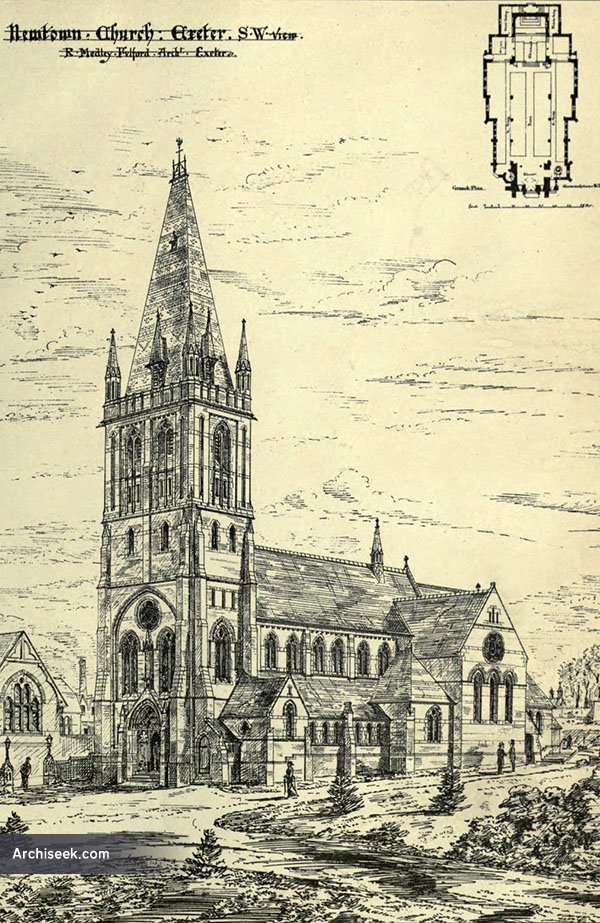 Never completed – the spire and tower being capped at nave height. The church was built in 1882 in an Early English style of red brick, to a design of R Medley Fulford. It cost £7,000 and has a chancel, chapel nave, transepts, aisles, vestries and a truncated western tower. The chancel was added in 1890 and an organ installed in 1903.

“Some short time since there was a competition among local architects for the proposed church to be erected by the Exeter Church Extension Society for a district taken out of the populous parishes of St. Sidwells and St. James. The plans being submitted to Mr. E. R. Robson as professional referee, he reported in favour of those with the motto of “Laus Deo,” prepared by Mr. R. Medley Fulford, A.R.LB.A., of the Close, Exeter, and the Committee followed Mr. Robson’s advice, and commissioned Mr. Fulford to prepare the working drawings. The building is to be of local brick, with Beer and Box Ground stone dressings externally ; and buff brick from Candy and Co.’s works, Chudleigh-road, with bands of a local red stone, and Hamhill internally. The shafts to the nave columns will be monoliths of red granite. The roofs to be “barrel” ones of deal and pitch-pine, and covered with slate. The only alteration made in the design since the competition is in the west tower; the ” saddle-back tower shown in the original design being at the west end of north aisle, whereas the present one is at the west end of nave, open to the interior, and of more stately proportions. The Newtown board schools adjoin the site, and a portion of same appear in the drawing ; they were erected some years since from the design of Mr. P. B. Hayward. The total length of the interior is 121ft., and 64ft. across the transepts, and will accommodate 820 on the ground- floor. There will be a gallery in the tower at the west end. The height, to the summit of the slated roof of tower, is 130ft. The work is to be commenced forthwith, and if funds will not admit of the whole being undertaken this year, a contract will be entered into for the erection of nave, transepts, and aisles, exclusive of chancel and tower above the level of ridge of nave roof.” Published in The Building News, March 4 1881.