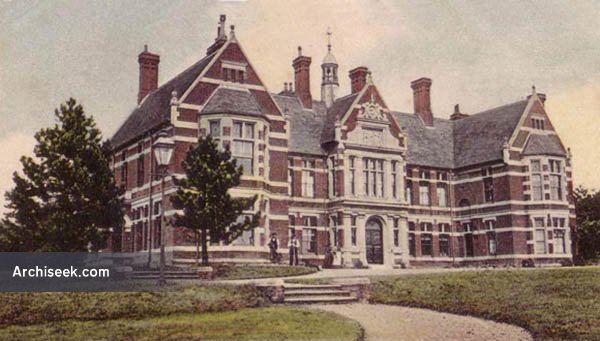 Patrick Stead came from Edinburgh to Halesworth in 1824 where he established a successful maltings business. After his death, he left a bequest of some £26,000 to establish a hospital in the town. The architect, Henry Hall FRIBA (1826-1909), designed the two-storey building with outpatients, accident ward, dispensary and other offices on the ground floor, with wards above, and it opened on 6 September 1882, having cost around £5,000. The balance from the bequest was invested to provide income for the Hospital. Still in use today as a hospital, its external appearance hasn’t changed much – the loss of the chimneys being the most obvious change. 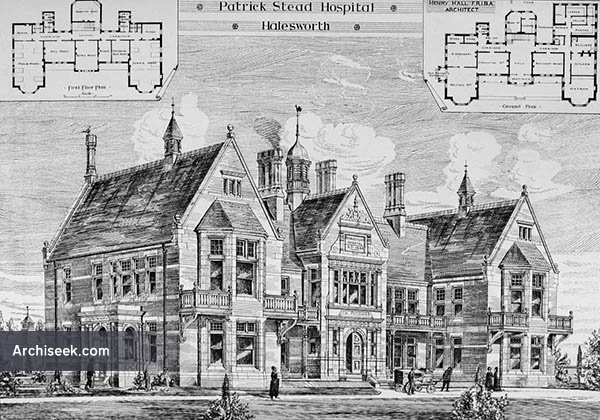 “This illustration shows the design accepted in on open competition for the above hospital. Mr. H.K. Colling was appointed referee, his recommendation being accepted by the trustees. The instructions required a dispensary for out-patients, and an accident-ward on the ground-floor, with the kitchen and necessary offices, and on the first floor a ward with six beds for male, and a ward with six beds for female patients, with an extra ward for special cases ; a convalescent or day-room, nurses’ rooms, matron and servants’ bedrooms, and an operating room. A lodge and mortuary are also provided. The plans attached show the disposition of the several rooms and wards. Mr. Henry Hall, F.R.I.B.A., is the author of the design, and the trustees have instructed him to carry out the work.” Published in The Building News, July 9 1880.