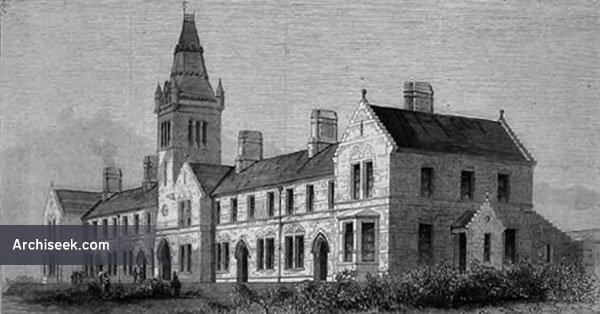 Ten Victorian almshouses in a Gothic style, for Charles McGarel. McGarel was a slave-owner and sugar trader in the early 19th century. Designed “for the benefit of persons not in the condition of paupers, who, having once seen better days, have, by no fault of their own, been redifced to comparative poverty, though not to actual destitution.” He was also responsible for building the Town Hall in 1869, at a cost of around 6,000.

According to the Larne Times “Charles McGarel’s father and mother ran a very successful inn at the corner of Dunluce Street and Cross Street that was patronised by some of the best-known people in the district, including Lord Antrim and the Bishop of Down and Connor. Charles and his brothers, John and William, emigrated to Demerera to seek their fortune in the sugar industry. Charles was exceedingly successful there and returned to settle in London as a partner in the firm Hall & McGarel.”