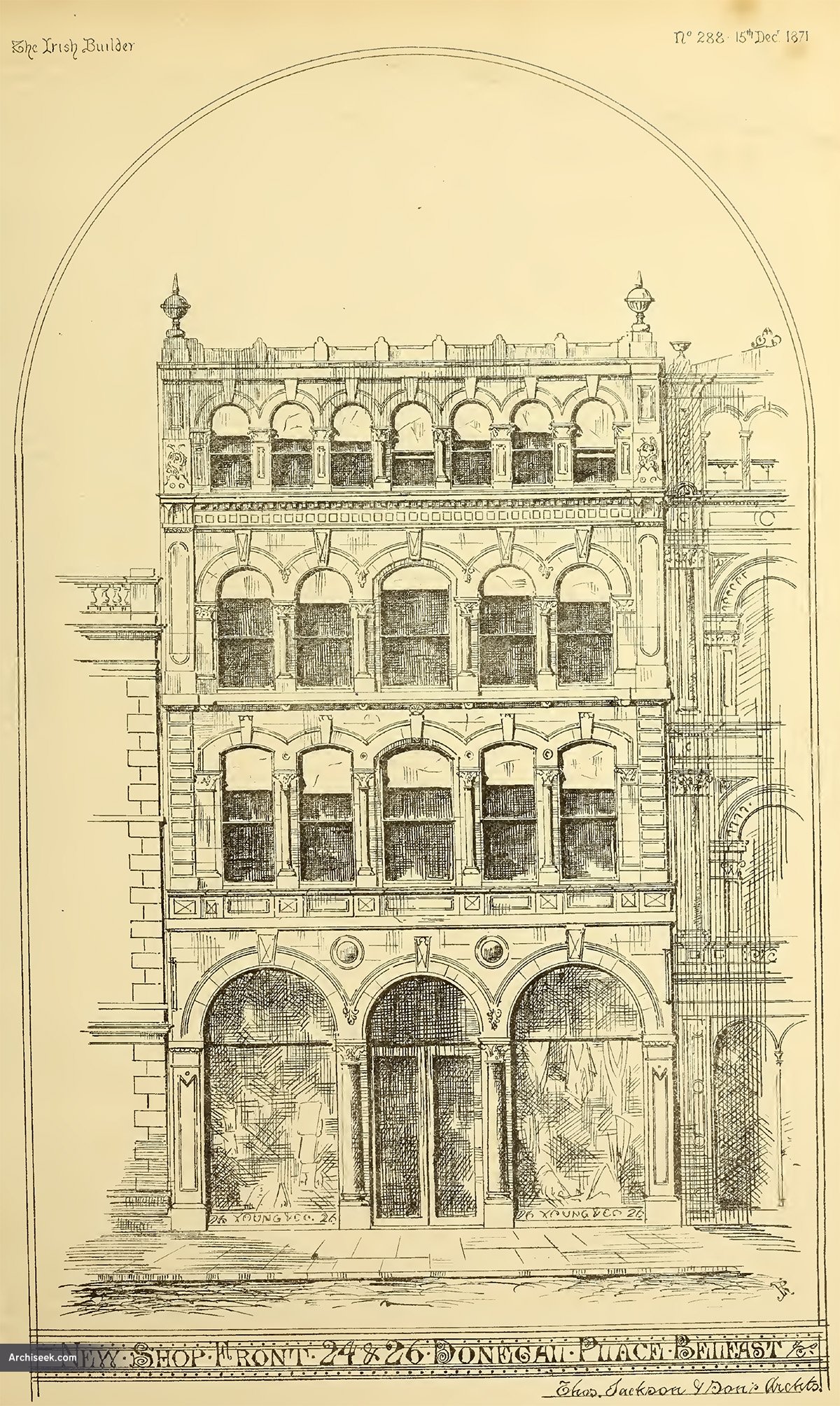 “In no locality within the northern capital are architectural improvements more markedly observable than in Donegall Place. To this already fine business premises in this grand throughfare there has been added the newly erected and attractive concerns of Messrs. Young and Co., Nos. 24 and 26, and which we illustrate in the present number. It is built on the site of the old Nelson Club, latterly occupied by Mr. Frederick Ogle on the shop and ground floor, and on the first story by Messrs. Thomas Jackson and Son, architects. The frontage of the new building is 35 feet by 60 feet in height, divided into four storeys. The portion rebuilt is about 80 feet in depth, where it is connected on the several floors with the wholesale warehouse of the long-established firm of Messrs. Day and Bottomley, extending back to Calender-street, a distance of some 250 feet. The entire of the new front elevation is off cut stone and plate-glass, the design being a modification of the Venetian style. The shopfront presents a very spacious recessed pair of mahogany folding-doors with panels of plate-glass set in between a pair of columns of Newry granite with carved capitals; the shop window at either side being of a magnificent plate of glass, containing 100 superficial feet in one piece, set in mahogany frames, and separated from adjoining properties by granite pilasters in unison with the columns, from whichj massive arches in cut stone spring, forming with the aid of spandrils a substantial base to receive the superincumbent work. The front of the first and second wareroom floors is divided into five segmental arched windows, and on each the arches spring from detached columns of pink granite, finely polished. The front of upper storey is divided into seven windows with semi-circular arched heads spring from cut stone columns and pilasters. The stop storey is finished with cut stone parapet, terminates by large carved urns, The shop-fittings are very handsome and complete. The spaces between the top of wall fixture and the lofty ceiling have been divided by pilaster painted in imitation of marble with carved and gilt capitals. The panels so formed between them have been arrange to receive each an ornamental carved and bronze bracket, on which has been places a life-sized bust of some celebrated personage. Amongst the number, there are one of the Queen, one of the Prince consort, one of the Duke of Wellington, with his contemporary in arms, he First Napoleon, one of Sir Walter Scott, one of Lord Byron, etc. Light has been admitted from the roof through a large oval open in the respective floors, surrounded by ornamental metal and mahogany enclosures.. The two upper wareroom floors are occupied in connexion with the wholesale department. The designs for the building and fittings were furnished by Messrs. Thomas Jackson and Son, and the works carried on under the direction by Messrs. J. and J. Guiler, builders, of Great Victoria-street. The painting and decorations have been executed by Mr. George Coulter and the gas-fittings and chandeliers by Mrs. Stewart, Victoria-street. Published in The Irish Builder, December 15 1871.