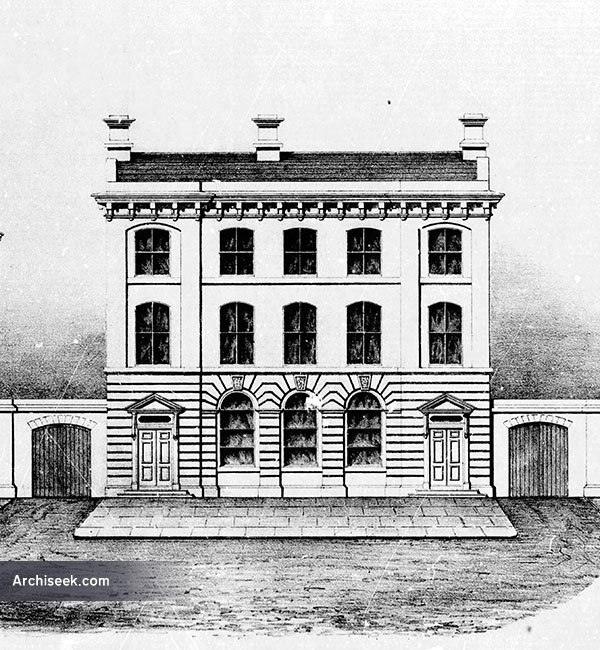 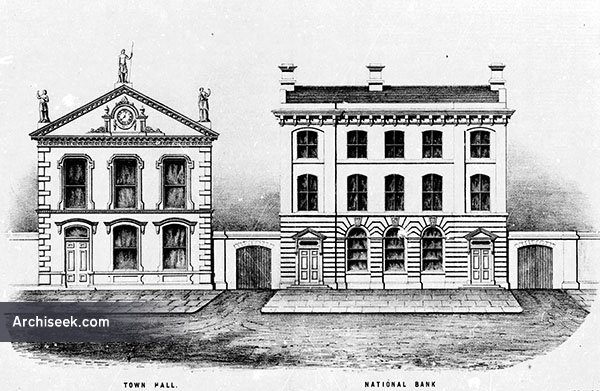 Bank branch designed for the National Bank by William Caldbeck, alongside his townhall. Now a branch of the Bank of Ireland. “The new National Bank-house at Mountmellick, lately erected by Mr. James Scanlan, of Listowel, from designed by W.F. Caldbeck, Esq., architect is a large and imposing building, occupying a very prominent and central position in that improving town. On the ground floor is a spacious offices, fitted up in the best manner, suitable for an extensive banking business, with a handsome entrance porch on one side to give access to office and a private room or office for manager, on the other side, and a good hall leading to his apartment, which occupy the upper two storeys of the building, with a large return at the rere extending to the garden. The portion of the house allotted to the manager contains ample accommodation and convenience, suited for the residence of a private gentleman, with out-offices and garden attached.

The building is well executed and reflects much credit on the builder. The main portion of the work being of punched limestone of the locality, with chiselled cornices and dressings to doors and windows, and the entire front of first storey of finely chiselled limestone from Stradbally quarries. The front is cut off from the general thoroughfare by a handsome palisading of cast iron scroll-work set in a chiselled limestone base, which adds very much to the appearance of the building.

The National Bank building will be also much improved by the new Town Hall, now in course of erection just beside it by the same builder, and also from designs of Mr. Caldbeck, Dublin.” From The Irish Builder, November 1 1863.