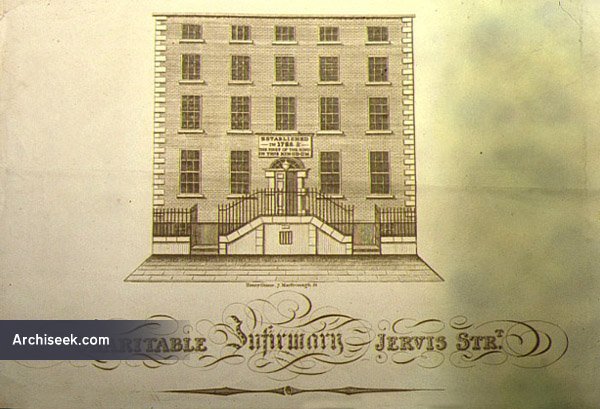 The hospital was founded by six Dublin surgeons as the Charitable Infirmary in Cook St., Dublin, in 1718, at their own expense. Ten years later they moved to a larger premises on King’s Inn’s Quay. When the plans for the new Four Courts were announced in 1786, it became necessary for the Charitable Infirmary to move on once more. The Earl of Charlemont, having just completed a mansion, now the Municipal Gallery, on Parnell Square, vacated his old family mansion at No. 14 Jervis Street, which was purchased by the trustees of the hospital.

Over time the house became dilapidated and was no longer suitable as a hospital. A subscription list was opened to which the merchants of the city subscribed generously and in 1804 the new Charitable Infirmary was opened. In 1854 the nursing and internal management were placed under the control of the Sisters of Mercy. The hospital was rebuilt and enlarged in 1877.