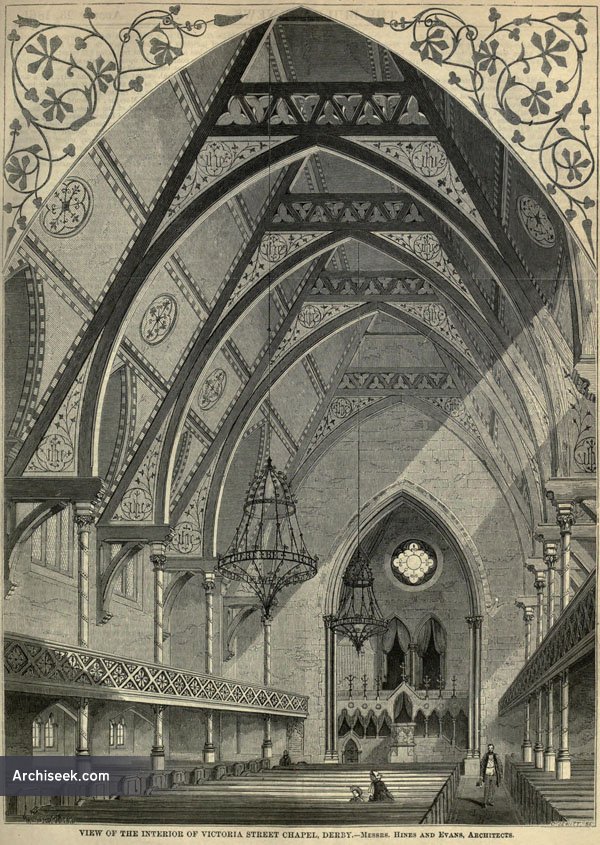 From the Building News: “WE this week publish an engraving of the new chapel recently erected in Victoria-street, Derby, from the designs of Messrs. Hine and Evans, of Regent-street, Nottingham.

The church and the schools attached to it together form a parallelogram of 138 feet by 63 feet; the entrance front of the former is on the north side facing Victoria-street, and the view from the north-west, embracing also the flank elevation, is one of the most picturesque and well-composed masses of building in the whole town. The schools and library are at the south end ; the approach to them is from Becketwell-lane, where the building has a frontage of 138 feet. A tower, 69 feet high, occupies the north-west angle formed by these two streets; it is crowned with a slated spire, 60 feet high, terminating with a metal cross and vane. The lower portion of the tower contains the staircase to one of the side galleries, another staircase to the opposite gallery is provided in a corresponding projection, finished with a gable, at the north-east corner of the building. The porch, in the centre of the north and principal front, is approached by a flight of steps under are deeply recessed archway with a carved trefoil- headed sub-arch supported by marble shafts. There are additional doorways on the east, west, and south sides. A lofty gable, recessed from the wings, rises in the centre of the north front ; it is pierced by a large six-light traceried window under an equilateral arch. Near the southern end of the church transepts project east and west.

The entrance to the schools and library is by a circular turret-staircase flanking the gable end of the former. The turret is surmounted by a high conical roof ; this and the gables over the transept and over the several west windows vary the whole outline in a most agreeable manner. They are grouped very artistically with the tower and gables of the principal front ; the long receding lines too frequently seen on the flanks of our modern churches is thus avoided ; a diversity of light and shade is skilfully introduced, and every minor feature of the design is gathered effectively round the tower which occupies the most prominent portion of the group. The roof of the ;church, by its unusual loftiness, gives the interior an imposing aspect ; it is constructed of open timber work, supported by carved pointed trusses, resting partly on the iron columns and partly on the side walls. The height from the floor to the apex of the roof is 70 feet. Within the gabled roofs, over the side windows, narrow passages are formed, which give access to a range of ventilating valves. on each side of the roof ; they are covered on the inside with large ornamental metal grilles.

There is an organ gallery, with vestries beneath it, at the south end of the building; the latter is separated from the church by a handsome arcaded stone screen with marble shafts, in the centre of which the pulpit is fixed.

There are galleries in the north, east, and west sides of the church, carried by ornamental brackets projecting from the columns, which support the roof. A convenient and noiseless approach is formed to the side galleries by stone-built corridors, running apparently within the thickness of the walls, but occupying, in reality, the space formed by the bold projecting buttresses which flank the sides of the building. Over these corridors there is a range of three-light windows which, lie the large windows in the transepts, commence at a height of 9 feet above the gallery floors. Two tiers of smaller windows underneath light the corridors and the space beneath the galleries.

The benches are of stained deal. The gallery fronts are also of stained framework enriched with color. The extreme length of the church is 100 feet ; the width, exclusive of transepts, is 50 feet. The library is 60 feet by 18 feet. There are seven class-rooms averaging 12 feet by 11 feet. The architects,as we have before stated, are Messrs. Hines and Evans, of Nottingham. The builder is Mr. W. M. Cooper, of Derby.

The church is mainly lighted by two magnificent gaseliers manufactured by Messrs. Brawn, of Birmingham.