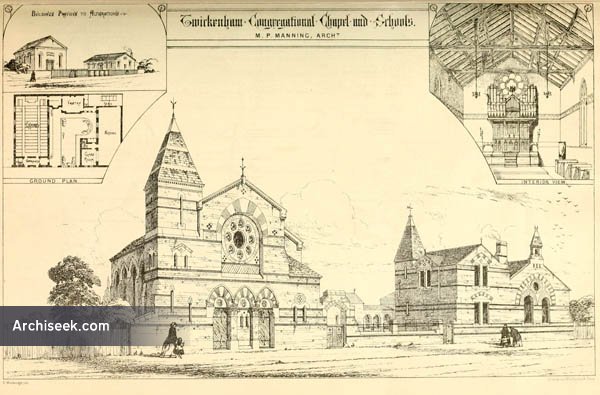 From The Building News: “Facing the green in the pleasant hamlet of Twickenham stands the Congregational chapel and schools which have lately being remodelled and extended. One of our engravings this week illustrates these buildings in their new form, as well as that in which they appeared previous to the alterations. The various parts of the buildings are so disposed as to range round three sides of the site, embracing a garden court opening out to the high road. The materials employed in the construction are yellow bricks, with dressings of stone and red brick. The warming is by means of hot water, and lighting by pendents from the roof, the latter executed by Messrs Peaid and Jackson, the former by Mr. J. W. Smith. Mr. Nye, of Ealing, was the contractor for the building works, and the whole have been carried out under the superintendence of the architect, Mr. M.P. Manning, of Mitre-court Chambers, Temple, E.C.”

From the 1867 Congregational Yearbook: “The buildings, which present a specimen of very successful planning and effective grouping, were designed with a view of making available, as far as possible, the old buildings and materials, and are of brick, picked stocks with red brick and Bath stone dressing partaking of a Byzantine character, adapted to the purposes of the buildings and materials used. The parts of the building in black indicate the extent of the old chapel and school, and those in half tint the new work. B, Platform; C, Pulpit; D, Passage to vestries; E, Minister’s vestry; G, staircase to gallery and heating chamber in basement; H, entrance vestibule, 15 feet by 6 feet; I, side lobby or wind porch; K, entrance to same; J,J, entrance doors from footpath of public road; L, large vestry, 20 feet by 16 feet. The remaining letters refer to offices and entrances; Y, large schoolroom, 54 feet by 22
The walls of the Chapel are raised and the whole covered with new open timbered tie beam roof, ceiled between the rafters. The seats are open benches, 2 feet 9 inches back to back and 20 inches for each person. The glazing of windows is in cathedral tint rolled plate, in quarry and geometrical designs. The gas lighting by pendants from the beams and the warming by hot water pipes. The contract price is £1534, which with the cost of mortgage, £596, deeds, commission etc, will be increased to £2,500”

A visiting reporter from the Richmond and Twickenham Times (11 Oct 1873) commented: “Had Solomon been an architect and seen the Congregational Chapel on Twickenham Green … [he] would have been sorely puzzled to define its architecture correctly …. In appearance the building is unique and as a matter of taste it is a question whether it would not be well for it to always remain so seeing that the elevation, which is Mediaeval – Norman – Gothic &c, &c, is as heavy as it is inartistic. On so good a site with the broad open Green before it to lend effectiveness and beauty to a pleasing elevation, it does seem a pity that the chapel is not as pleasing to the eye as it might have been, had a little more taste been displayed in its deign. As it stands, it is a kind of architectural sphinx, for it remotely suggests a Rhenish castle in miniature, a one storied ecclesiastical villa, an attempt at a church and a churchified chapel. Were it possible to speak in terms of praise, consistently with truth, of this curious conglomeration of bricks and mortar, it would give me great pleasure to do so, but I have to write what I think, and am therefore bound to confess that beauty is not an element in the design of the Twickenham Congregational Chapel.
Nor is the interior any more pleasing than its outwards appearance. Both are wanting in finish and completeness. The pews are not even painted and in consequence, time has left its mark upon them in many grimy patches. Mischievous little hands have exhibited their artistic powers by sundry pencil sketches of the heads of ladies and gentlemen which forcibly display the appreciation of the grotesque in juvenile minds and their ingenuity in extemporising drawing boards in the most unlikely places, even on the backs of pews underneath the shadow of the pulpit. It will not, however, be long before the chapel is completely renovated (or perhaps it would be more correct to say completed) ..