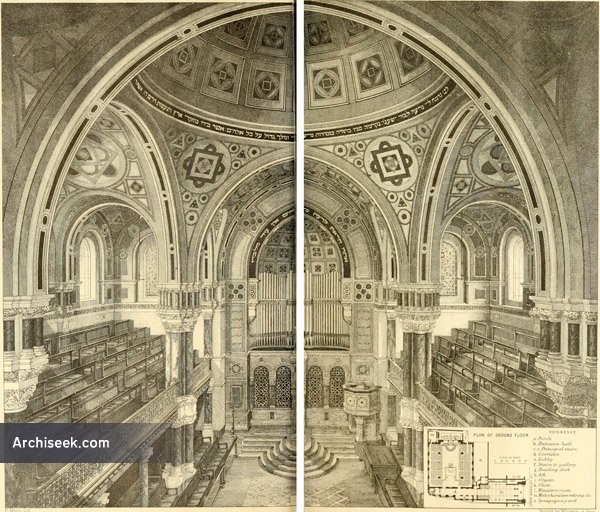 The main sanctuary is built in the Byzantine architectural style. The premises also contain offices, a library and various community facilities. From The Building News, April 7, 1871: “JUST as the City churches have become deserted by the wealthier class of people, and new churches are being built in the Western districts, to accommodate the Western movement of the worshippers, so with the Jewish community — the older synagogues in the City are comparatively unoccupied, and many new ones have within the last few years been built in the suburbs. A short time since we chronicled the opening of a synagogue to hold a thousand people in Great Portland-street, and we now have to record the consecration of a building of similar size and great architectural pretensions which has just been completed in LT])per Berkeley-street, close to the corner of the Edgware-road. Among Jews, as among their Christian fellow-citizens, what is called orthodoxy is not universal ; and this new building is to be occupied by what we may term a body of Jewish Dissenters, differing from their co- religionists truly in matters of small moment, but still of sufficient importance to cause the Chief Rabbi, Dr. Adler, and all the orthodox Jewish ministers, to consider it to be their duty to absent themselves from the ceremony of consecration.

The founders of this congregation of Jewish Dissenters, by whom this building has been erected, left the orthodox Jewish body some thirty years ago, through just such a communal quarrel as caused old Isaac Disraeli to leave the religion of his fathers. Starting with a small room in Burton-street, their numbers increased, until about twenty years ago they built for themselves a small synagogue in Margaret-street, and since then the further increase of their congregation has made the erection of the building in Upper Berkeley-street a matter of necessity.

This building, though monumental in character, is erected on leasehold land belonging to the Portman estate, and held by the trustees for a term of ninety- nine years only. The main portion of the building occupies back land, and the exterior is consequently unseen from the surrounding streets, but the stone entrance front in Upper Berkeley-street forms a fitting entrance to an important building.

As long ago as January, l857, a building committee was formed to collect funds, and one of their first steps was to invite a limited number of architects to submit competitive designs for the intended building, and to ask Mr. P. C. Hardwick, the eminent architect, to assist them in their selection of a design. This resulted in the choice of the design of Messrs. Davis and Emmanuel, of 2, Einsbury-circus, and which has since been carried out by them.

The building recently consecrated is a domical structure, Byzantine in character, and a square on plan, measuring seventy feet each way, and with a wide gallery along two sides and western end ; the ceiling consisting of a large central dome, and four small domes in the angles, and four great arches covering the side spaces. This ceiling is carried by four piers of clustered columns of Devonshire marble with carved capitals.

At the east end of the building Is a domed semi- circular recess, or apse, in which is placed the organ and choir, and in the centre of this apse is placed the ark or shrine, which is the receptacle for the scrolls of parchment containing the words of the Mosaic Law, and is constructed entirely of inlaid marble work.

A peculiar feature in this building is the placing of the choir at the east end of the building, facing the congregation, and concealing them from the view of the congregation by a screen of marble containing openwork grilles of gilded metal, the arrangements of this portion of the building reminding one strongly of the new Greek Church at Paris. The stone and marble reading-desk also, which occupies the centre of the floor, resembles the “ambon ” in the older Greek churches. The organ is placed in the apse at the east end, and behind the ark or shrine ; certainly the very best position in which an organ can be placed in a musical point of view.

Some of the arrangements of this building deserve special consideration at the hands of those who have the planning of our public churches and edifices. A gangway is reserved all along the side walls of the building, so that persons coming in after service has begun may reach their seats with- out disturbing the mass of the congregation. All the doors through which the public have to pass swing outwards as well as inwards, and are arranged for the egress of a crowd on much the same principle as an engineer would lay out a system of water- pipes, viz. : — the occupants of the ground floor, 500 in number, pass out through two five feet wide doorways into a corridor 10 ft. wide, and similar means of egress is given to the 500 occupants of the galleries. Where the occupants of the galleries and ground floor meet, the hall or atrium is 20 feet wide, and the opening of the great arch and gates in Upper Berkeley-street is of this width. There is thus a total prevention of a ” block” in the outgoing crowd.

From the Oriental custom which exists in synagogues of separating the men of the congregation from the women, and placing the latter in the gallery, it becomes a special matter of difficulty to so arrange a building as to give equal gallery accommodation to that on the ground floor, and in order to give a place of meeting (of the male and female members of the same family after the service, a spacious hall or atrium becomes a necessity of the case, and consequently a feature of the plan.

The decoration also is somewhat peculiar. The highest class of decorative art — viz., subject painting or figure sculpture, is necessarily absent, the Jews, so far as their religious buildings are concerned, reading literally the Second Commandment. In this building the decoration of the flat surfaces depends entirely on the varied combinations of simple geometrical forms, picked out with colour, and on the leaves and flowers introduced in the carvng; and here the lily, the pomegranite, olive, fig, and palm, are the types which are conventionalized.

One thing may certainly be claimed for this building : the principle of truth in construction, of which Mr. Ruskin is the apostle, has been nowhere violated. There is none of the sham marble work, sham stonework, and imitation oak graining, which combined to make up the decorative materials of the architects of twenty years ago. The artificial fighting of the building is managed by five sunlights in the centre of the domes, by starlights and by suspended globe lamps under the galleries.

The part upper of the entrance building in Upper Berkeley-street is arranged to form a committee- room and residence for beadle.

Many special objects in the building have been presented to the Synagogue by the wealthier members of the congregation. The ark itself is the gift of the ladies of the Goldsmid family. The pulpit and marble pavement were presented by Mr, D. C. Stiebel ; the reading desk by the Henriques family, in memory of the late Jlr. D. Q. Henriques, who shortly before his death presented the two stained- glass windows for the east-end wall. The Commandment tablets on either side of the apse arch are executed in gold mosaic by Salviati and Co., and are the gift of Mr. Dresden, and the Perpetual Lamp, which hangs before the ark, was given by Mr. Jacob Mocatta. and the entrance gates are the gift of Mr. Simon Waley.

The building has been erected from the designs of Messrs. Davis and Emanuel, architects, by Messrs. George Myers and Sons, builders, of Lambeth. The marble work of ark and choir screen, reading desk and pulpit are by Messrs. Poole and Sons, the Westminster Abbey masons. The pitch-pine seating is by Mr. W. H. Lascelles ; the gas fittiags by Messrs. H. Mulett and Co.; the main portion of the stone carving is by Mr. Williamson ; the system of hot- water-pipe heating and ventilation has been carried out by Mr. W. W. Phipson, C.E.; and the stained- glass windows are the production of Mr. A. F. Usher. The organ has been built by Messrs. Gray and Davison, at a cost of l,200, and the total cost of the building will be about 20,000.

We give this week a double-page Illustration of the interior of the new Synagogue.