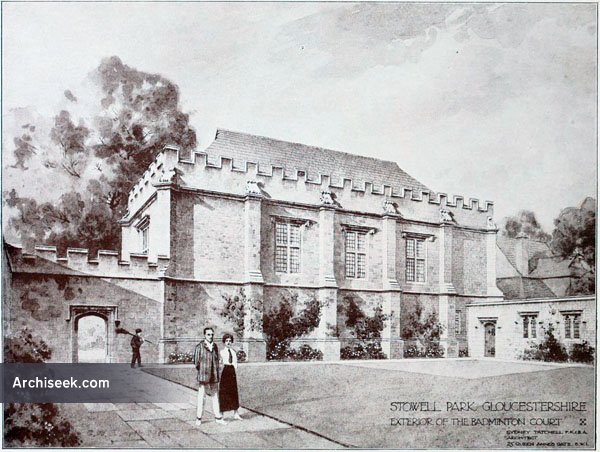 Published in The Building News, August 20 1919: “The Badminton Court is erected on the site of some old stables. The new building is designed to harmonise with the west wing of the mansion which flanks what is known as the CTteen Coui-t, one of the most secluded and restful parts of the gardens. The corridor leading from the mansion to the Badminton Court forms the north side, and an old embattled garden wall the south of the Green Court. The Badminton Court, in common with all the alterations and additions carried out in recent vears for the Rt. Hon. the Earl of Eldon, at Stowell Park, his Gloucestershire seat, was built entirely by the estate workmen from the designs and under the general direction of Mr. Sydney Tatchell, F.R.I.B.A., who has lent us the watercolour of the exterior exhibited at the Royal Academy. We gave some photographs of the garden house and other work carried out lately by the same architect for the Earl of Eldon in The Building News for May 3 and July 4, 1917, also January 30. 1918.”