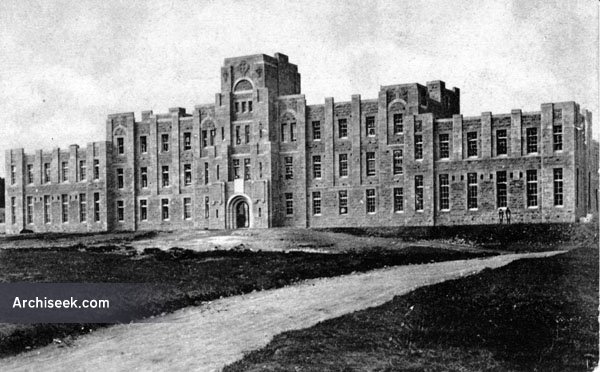 Seen here before the addition of the extra storey of 1939 flattened the highly original composition. An abstraction of collegiate gothic into a distinctly early twentieth century style with elements that are strongly vertical, and symmetrical. The drama of the facade is created by the pilasters that begin at first floor level and cut through the roof line. Not purely decorative, some contained chimney flues. Well received by the architectural press of the day, it was described in the Irish Architect and Craftsman as: “the structure itself is in every sense a fine architectural composition worthy of the new spirit of the age…. and as a specimen of collegiate architecture it could not be excelled.

The Irish Builder described it thus: “A remarkable and original piece of work, showing that where there is a consistent ideal, admirable results may be attained by the use of even the simplest and plainest forms and materials.”