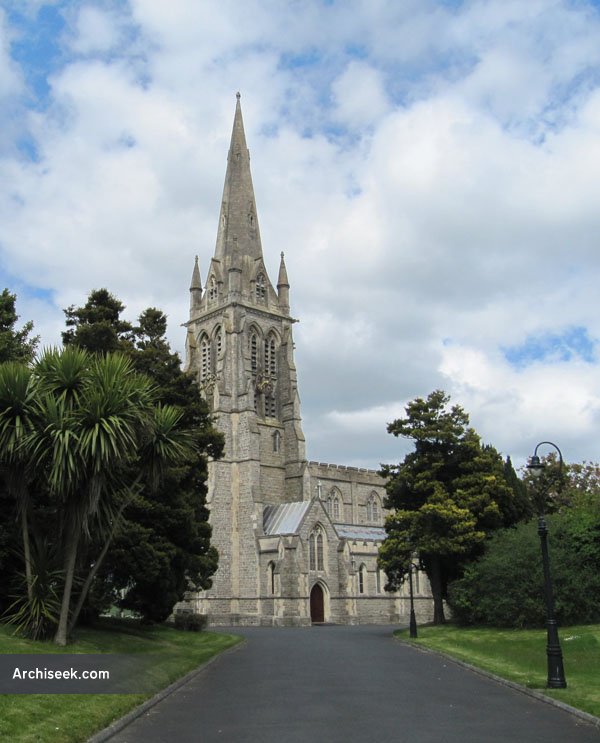 There is a fine series of 18 windows, designed by George Daniels for Clayton & Bell. Constructed after the disestablishment of the Church of Ireland, which was followed by an upsurge of lay initiative and of giving, giving Ireland some late-Victorian gems including Saint Fin Barre’s Cathedral in Cork; the rebuilding of Christ Church Cathedral, Dublin; and St. Saviour’s.

“The new church of St. Saviour, Arklow, built at a cost of nearly £30,000, borne by the Earl of Carysfort, was consecrated by the Archbishop of Dublin on August 12. Sir Arthur W. Blomfield, A.K.A., was the architect of the church, which consists of nave, aisles, transepts, chancel, chancel aisle, vestry, and organ-chamber, and is built of granite in the Early English style. The tower is 150ft. in height. A carved representation of the Last Supper is over the Communion-table, and above it a stained – glass window. The open roofs and ceilings are of oak, that of the nave being vaulted with carved bosses at the intersection of the groined ribs. The chancel ceiling is formed with a series of carved, moulded panels, supported on moulded and carved brackets, and enriched with carved bosses. The fittings, including the seats, clergy and choir stalls, pulpit, organ- elite. Communion-table, and rails, are made in walnut: the screen and internal lobbies are of oak. The reredos is of Corsham stone, with Connemara marble shafts and mosaic panels. The sculptured panel of the ” Last Supper ” is the work of Mr. Thomas Nicholls.” The Building News, September 1 1899.