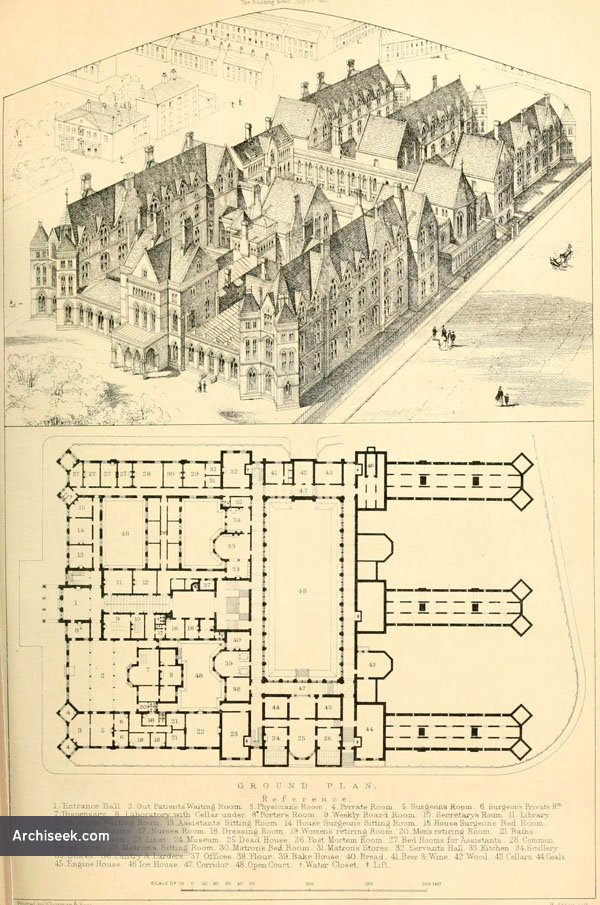 Construction of the current hospital on its new site in Great George Street started in 1863 to the designs of Sir George Gilbert Scott. Before drawing up the plans Gilbert Scott and the Infirmary’s Chief Physician, Dr Charles Chadwick, visited many of the great contemporary hospitals of Europe, where they wereimpressed by hospitals based on the pavilion plan recommended by Miss Florence Nightingale. They adopted this for the new Infirmary, making it one of the first and largest hospitals in England to be designed on the pavilion plan which had been pioneered in France. Accommodation for nearly 300 patients was divided between the separate wings, which Scott linked to the central block by long arcaded corridors running through courtyards which have since been filled in. The concept was to promote ventilation in order to prevent the spread of infection.

It featured the latest innovations, with plentiful baths and lavatories throughout, and a system of hydraulic hoists to reduce the labours of attendants and nurses. After construction was completed, it housed a temporary loan exhibition (‘National Exhibition of Works of Art’), held to raise funds for the new building and allow time for services to be moved from the old Infirmary. The new building, which cost £100,000 to construct, became fully functional in May 1869.
The original Grade I listed building has been extended several times since then, notably by George Corson in 1891–92.

As published in Building News and Engineering Journal, 5 July 1867,: “The new Infirmary of Leeds, which we illustrate this week, is one of the most perfect works of its kind to be found in Europe, and fully sustains the well-earned reputation of Mr. G. Gilbert Scott, R.A., its architect. It was planned on the Pavilion system, after a very careful inspection of the most famous hospitals on the continent, and embodies all the most recent improvements. The pavilions are arranged after the manner of those at the celebrated Lariboissière [stet] hospital, excepting as regards their further ends, which differ from those of any existing hospital. The central front, from which the pavilions diverge, is placed in the middle, and from it the pavilions extend towards the front and back, and on the level of the latter. The entrance is in the centre of the southern end, which is the principal front. From the entrance hall a corridor runs back nearly as far as the central court, where it reaches the main staircase, by which the corridor or cloister of that court is reached. This surrounding corridor is repeated, however, on the entrance story, and from it are hydraulic lifts for patients to each pavilion. By this arrangement there is obtained a second ground story below the ground story of the hospital itself, which is devoted to the various departments of management and administration. The proportions and general scheme of works will be seen by reference to our illustrations. We may state that the great central hall is 150ft. long by 65ft. wide, and has a finely designed iron and glass roof; and the galleries are ten in number, varying from l25ft. to 110ft. in length, by 28ft. in width. The material for walling is pressed brick, with stone dressings, &c., where indispensable. The staircases throughout the building are of stone; the ceilings are finished with Parian cement, and the floors are of oak. The foundation stone of the Infirmary was laid in March, 1864; and, as our readers are aware, the National Exhibition of Fine Arts, to take place in Leeds next year, will be held in this building, which is in every way admirably adapted for the purpose. The wards have double open stoves in the centre, the smoke being carried off by ascending flues.”