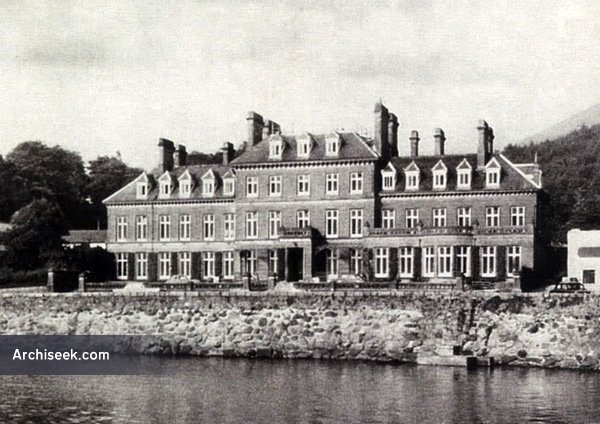 A large hotel facing Carlingford Lough, with a main frontage of almost 150 feet broken into a central block and two lower wings. Alongside the hotel were the Temperance Refreshment Rooms, which catered for customers who did not drink alchohol. Originally known as the Mourne Hotel, it was taken over and extended by the Great Northern Railway in the 1890s. William J. Watson was a local architect who worked almost exclusively in south Co. Down, operating out of successively – Newry, Warrenpoint, and Rostrevor. Destroyed by a firebomb during the Northern Ireland Troubles.

“This building, now approaching completion, shows, we are informed by the local Telegraph, a frontage of 150 ft. towards Carlingford Lough. The centre portion is carried up one storey higher than the wing portions, and the centre rooftowers up in a most pleasing manner, so as to artistically break the sky-line. The top of this roof is to be used as a kind of promenade, from whichsweeping views of the adjoining woodlands and the lovely Bay of Carlingford will be commanded. Ornamental balconies will serve the sitting-rooms on the first chamber floor, and the doriner roofs of unique forms very happily blend with the principal roofs. The hotel is approached through a vestibule or porch, which will be separated from the entrance hall by an ornamental mahogany screen. The ground floor comprises public coffee-room, ladies’ coffee-room, drawing-room, and suites of sitting-rooms and bed-rooms, with bath rooms adjoning. The upper floors contain a large number of sitting-rooms and bed-rooms. Each floor will be gained bp an extremely handsome staircase. The most striking internal features, however, are the long and many-arched corridors that run from end to end of the building in each storey.

The kitchen and the servants’ apartments are situated in the basement. Fresh and salt water baths of every description will be at the disposal of the future guests, and to ensure their safety ſron fire each corridor will be fitted up with fire-cocks or hydrants. Indeed, in every conceivable particular their comfort and convenience are being skilfully provided for. All the internal woodwork is of pitch pine, from the workshops of Mr. Alexander Wheelan, of this town [Newry], and it reflects much credit upon him as a builder. The entrance-hall and ground floor corridors or passages are to be covered with encaustic tiles, and all the furniture is of special designs to correspond with the architectural character of the building, which is a fine example of Gothic adapted to domestic purposes, and is in every way worthy of its enterprising proprietors. The designs were made by Mr. William James Watson, A. R., I.A.I., architect, of Newry, and the works throughout are being executed under his professional guidance.” The Irish Builder, April 1 1876.