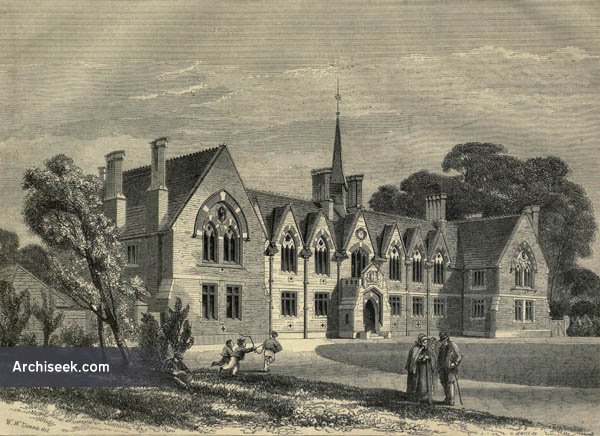 Published in The Building News, January 25 1861: “THIS Institution, together with 24 Almshouses now in the course of erection on an estate called the “Elms,” purchased for this purpose by the Drapers’ Company, has been founded by them for the education of boys being the sons of freemen of the company.

The school, of Domestic Gothic character, is built of brick, with malm “facings” and Portland stone “dressings” it contains on the ground op principal story, a school and class-rooms, entrance-hall and staircase, dining-hall, kitchen, and offices, sufficient to accommodate 100 boys. A large apartment, corresponding with the school-room, to be fitted up and used as a chapel for the boys and almspeople.

The nature of the clay soil on which the building is erected has suggested the precaution of keeping the principal, or ground story, some 4 feet above the general level of the ground, and the excavation of a basement story under the whole area of the building, every precaution being taken to guard against damp by concrete and effcient drainage throughout the whole site.

The school forms one of three sides of a quadrangle, of which the almshouses (twelve in each block) form the other two sides. A handsome fence of iron railing on a dwarf stone wall will form the separating boundary from the high road. A wide roadway will be formed round the quadrangle, and the centre portion laid out either as a garden or grass-plat.

The whole is from the design and under the superintendence of Herbert Williams Esq., the architect of the Drapers’ Company. The contract was taken by Mr. John Willson of Southwark, in March last, at the sum of 17,581, of which £9,450 is for the school, the remainder for the alms- houses, grounds and drainage. The clerk of the works is Mr. James Mortlock.