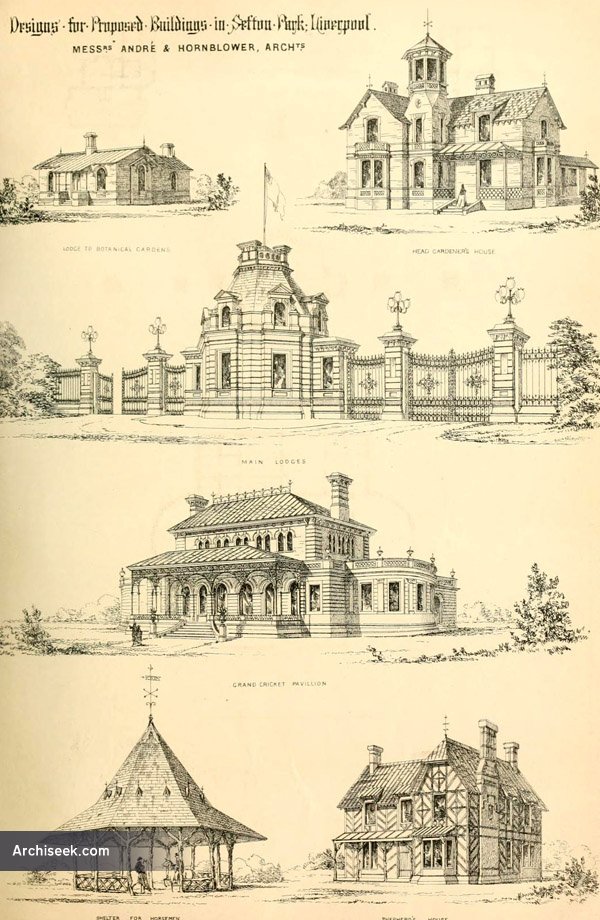 Sefton Park is a 235 acre, Grade II* historic park in the Sefton Park district of Liverpool. In 1867 the local council purchased the land from the Earl of Sefton and a European competition was launched to design a grand park. 29 entries were received and the competition was won by a French landscape architect Édouard André with work on the design also undertaken by Liverpool architect Lewis Hornblower. The park was opened on 20 May 1872 by Prince Arthur who dedicated it “for the health and enjoyment of the townspeople”. Hornblower’s designs for the park lodges and entrances were elaborate structures, and included follies, shelters and boathouses.

Published in The Building News, August 2nd 1867: “THE premium of three hundred guineas, which was offered by the Corporation of Liverpool for the best plan for laying out the Sefton Park, has been awarded to Messrs. Andre and Hornblower. The latter gentleman is a well-known architect of many years’ standing in Liverpool. The estimated cost of carrying out their plan is £85,000. The second premium of one hundred and fifty guineas, has been awarded to Mr. Edward Milner, of Sydenham, whose plan is estimated to cost £122,560. In last week’s number of the Building News, we spoke in very favourable terms of both these designs.”