“The purpose of the competition is to create a body of ideas about how the Central Bank building might approach its next phase of life… to re-imagine the building and its immediate surrounding environment in an innovative and exciting way,” DoCoMoMo Ireland said. “Buildings often outlive their original function. The headquarters of the Central Bank of Ireland on Dame Street (Stephenson Gibney Associates, 1980) may soon be vacated by its current occupant. The question is: what does the Central Bank want to be?”

There were 58 entries for the competition, including several from abroad. An exhibition of all the entries was officially opened last night and continues at the Irish Architectural Archive, 45 Merrion Square, until April 26th. 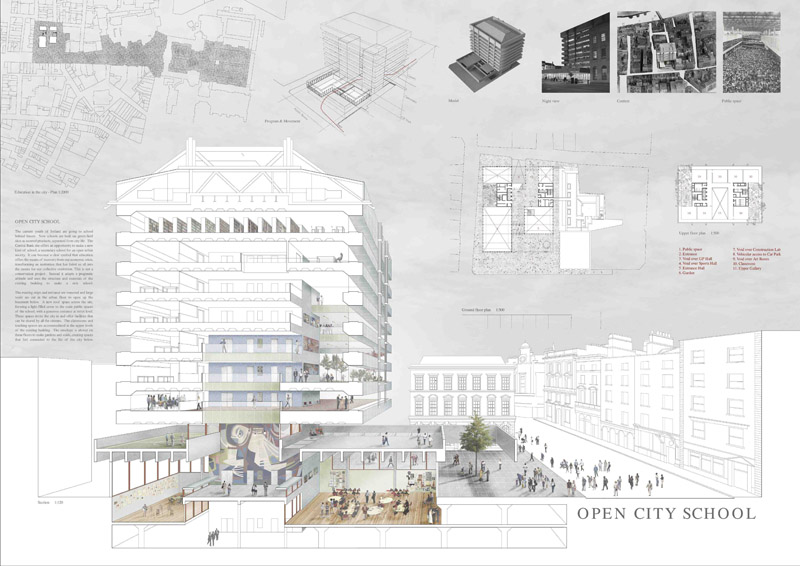 First Prize was adwarded to

– citation: “Turning over one of the city’s largest and most centrally located buildings over to Irish youth is a radically empowering and optimistic gesture. Although the jury expressed reservations about the way that it encroached on the plaza, which constitutes the Central Bank’s principle civic amenity, the fact that the new spaces created here would provide a facility that could be used outside of school hours by the larger community helped compensate for this.

The graphic presentation is exceptionally strong, above all in the way that the section drawing encourages an understanding of the interior organization of an originally rather forbidding structure, which is here opened up to engage with the future of the larger society. The details of this proposal thus quite literally demystify and transform what has been the power and authority vested in one of Dublin’s most prominent buildings into a space of participatory activities that give access to opportunities for those at the beginning of their lives.

The proposed interventions alter the building’s purpose and its internal organization without eroding, however, the structural integrity of Stephenson’s original design. At the same time, the targeted use of subtle color in the well-organized drawing highlights the new uses that are now being slotted into it.” 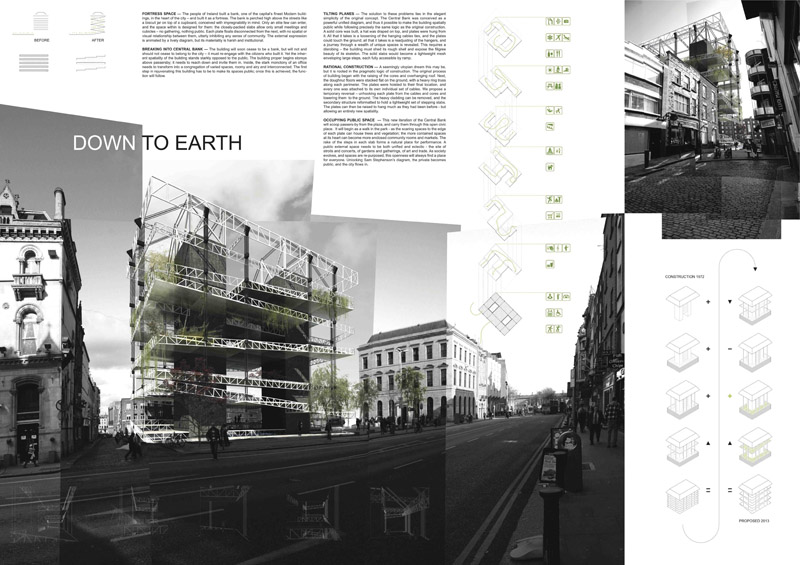 Prize for Best Presentation was awarded to:

. Thir citation: “Central to this proposition is a reconfiguration of the central bank building as a structure which is spatially continuous with its public plaza. The presentation is succinct and provocative, presenting the bank in a state of partial destruction with a new semi-open park spiralling around the existing lift cores. The open platforms of the park are suspended, optimistically, from the retained roof truss. The presentation dispenses with conventional drawings and instead presents the proposal through a series of diagrams, two photo-montages and a sequence of wireframe perspectives. One key set of diagrams summarises the original construction sequence, with the proposal then presented as a partial reversal/rewinding of this process. The images and diagrams trigger a new perception of the building by exposing, x-ray like, the inventiveness of the original structure.” 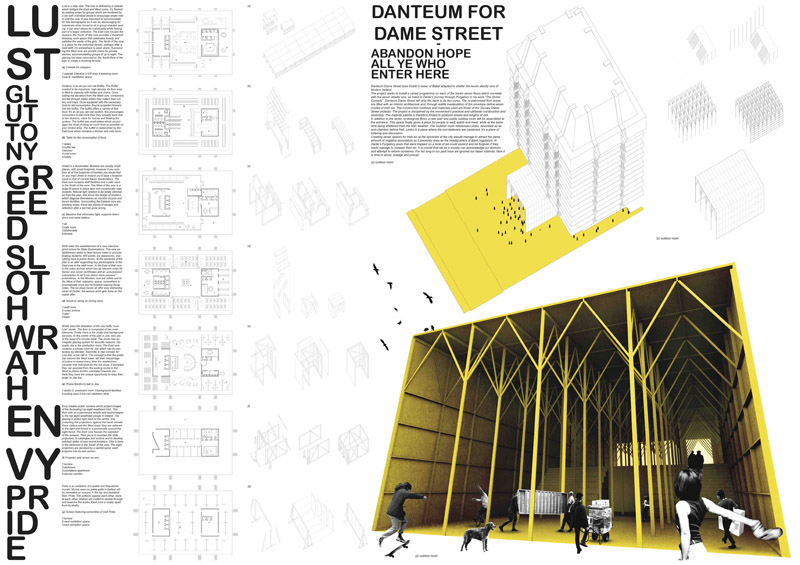 Student Prize was awarded to ‘Danteum’ by