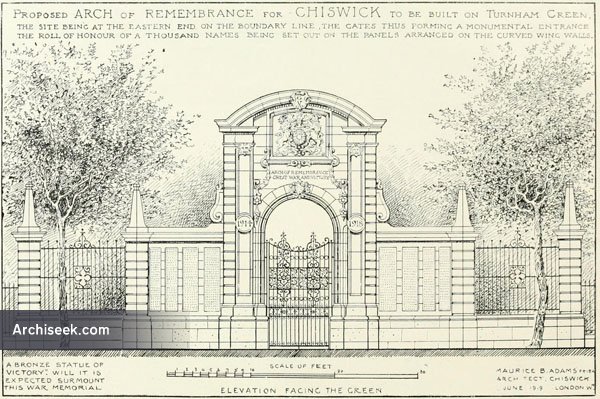 The local Council discussed how best to commemorate the dead of the recently ended war.. Rejecting the suggestion of a sunken bandstand on Turnham Green, the Council decided to build more almshouses – the War Memorial Homes of Rest off Burlington Lane – and to put up a memorial arch on Turnham Green, designed by Maurice B. Adams. However, public subscriptions for this were not sufficent, and a more modest, memorial was erected instead. Bedford Park put up its own war memorial – the seat opposite the hall of St Michael and All Angels.”

From The Building News, July 9 1919: “The site decided on for this war memorial is an ideal one, and the arch will form a monumental entrance at the eastern end of Turnham Green. Coming from London along the Chiswick High Road on the way to Kew, the monument will be seen from some considerable distance prominently rising at the end of the vista, with the tall spire of Sir Gilbert Scott’s early church in the middle of “The Green,” well surrounded by trees, the group composing finely against the western sky, or when viewed from the other prospect, returning from Gunnersbury, the arch will stand out well in contrast to Sanderson’s white glazed brick wall-paper factory building near the top of the Duke’s Avenue. The segmental wing walls of “this victory arch,” following the boundary line of “The Common,” will be tabulated by the Roll of Honour of a thousand names set out on monolith panels. To assimilate the needed height for the inscriptions on these curving wings with the comparatively low enclosing fences round Turnham Green Common, it is proposed to extend the structural composition of this frontispiece right and left by two further bays, repeating the obelisk capped piers and filling the interspaces with wrought-iron grilles, to accommodate harmoniously in this way the existing low lines of railings by avoiding too sudden a discrepancy in relative levels.

Architecturally the monumental appearance of the arch depends almost entirely upon its lofty proportions. The vertical lines and pilaster treatment adopted help to restrict the cost. Increased prices in these times render an expenditure on structural depth in plan entirely out of the question, while funds are none too ample. Any arch of modest dimensions schemed on horizontal lines obviously must be unequal to an effective note of contrast to so eminent a steeple close by, in the middle distance of the surroundings. The heraldic panels on both facades, one the Royal arms and the other St.George of England, are designed for bronze. It is proposed to surmount the structure with a bronze statue by a first-rate sculptor.”