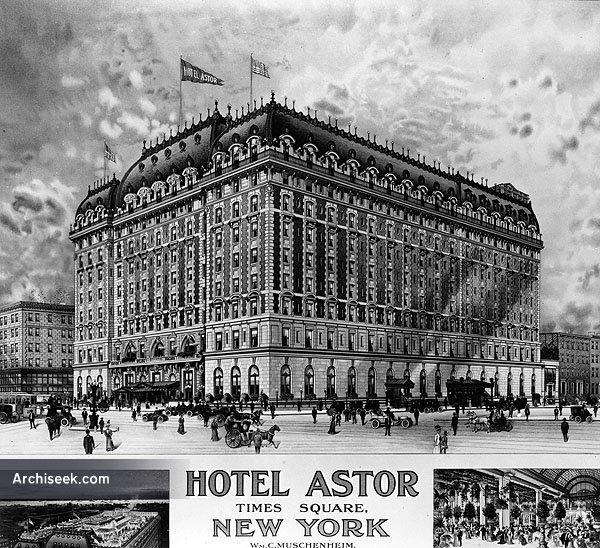 With its elaborately decorated public rooms and its roof garden, the Astor Hotel was perceived as the successor to the Astor family’s Waldorf-Astoria on 34th Street. Plans for the grand hotel were conceived in 1900 by William C. Muschenheim and his brother, Frederick A. Muschenheim, and was built in two stages, in 1905 and 1909-1910. On completion it occupied an entire city block at a reported total cost of $7 million. Architects Clinton & Russell had designed a number of Astor commissions; here they developed a very Parisian “Beaux Arts” style completed with green-copper mansard roof. Its eleven stories contained 1000 guest rooms, with two more levels underground for its extensive “backstage” functions, such as the wine cellar. The Astor was closed in 1967 and demolished in 1968. The site is now occupied by a 54-story skyscraper designed by Der Scutt of Ely J. Kahn & Jacobs and completed in 1972.