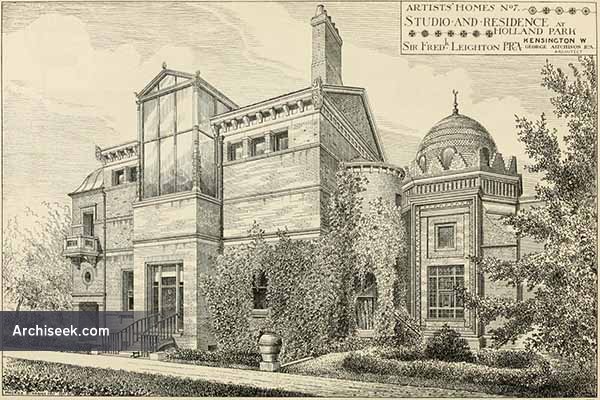 “Last week we fully described this interesting house, at the same time giving plans, elevations, and a general perspective view. To-day our double-page plate illustrates the elaborate interior decorations of the Arab Hall. The dome is decorated on a gilt ground, and the windows are glazed with stained glass. The small shafts to the side-openings are entirely of white marble, and the caps to the large columns on either side of the entrance are gilt. The wall- tiles to the window-reveals are dark blue. In other respects, the black-and-white drawing furnishes as fairly a good idea of the decorative effect as any drawing of the kind, simply in line, can have. Mr. George Aitchison, B.A., was the architect for the work. The marble-work was by Messrs. White and Sons, of Vauxhall Bridge-road, Pimlico. The drawings from which GUI’ illustration is taken were exhibited this year at the Royal Academy.” Published in The Building News, October 1 1880.