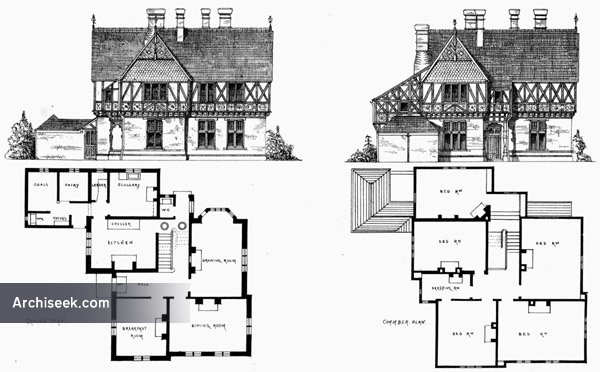 Perspective View With Plan published in The Building News, March 15th 1872. “The small half-timbered house, of which we this week give plans and view, has lately been erected within a few minutes’ walk of Bexley station, and on a site commanding some of the prettiest scenery in Kent. The owner of the land was desirous’ of building various houses upon his estate, which, while being inexpensive, so as to let when built at moderate and at the same time remunerative rentals, should be artistic in character, and, so far, as different as possible from the ordinary speculative villas of the present day. The plans have been carefully and conveniently arranged, and in the external design all sides have been treated architecturally, so as to be picturesque and characteristic from all points. The lower story is built of red bricks, while the upper floor is brought over after the manner of the old half-timbered houses of Kent and Sussex, the spaces between the timber framing being filled in with brickwork in cement, and cemented on the face, with plain incised ornament scratched on ; the roof is covered with plain red tiles, with Cooper’s ornamental tile-cresting made from the architect’s design. The whole of the works have been well carried out by Mfssrs. Adamson & Sons, builders, of Turnham-green and Ealing, at the moderate cost of about £1.130. including boundary walls and fences, from the’ designs of Mr Robert W. Edis, F.S.A., architect, of 14, Fitzroy-square. Mr. Edis is, we understand, the architect of other houses of a similar character, but varied in design, on the same estate.”