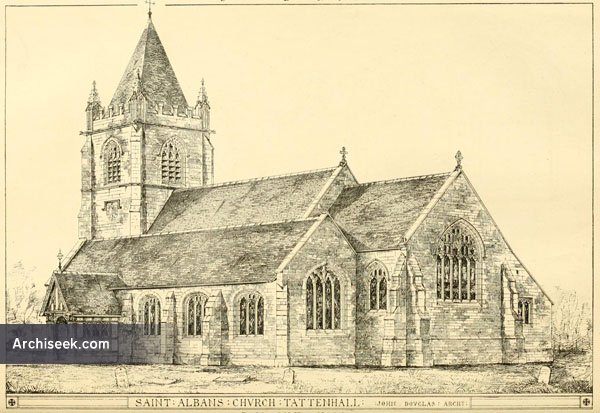 It is believed that a church has existed on this site since the time of the Norman conquest. Although the tower and parts of the present church date from the early 16th centur, the church was restored and largely remodelled in 1869–70 by John Douglas.

Published in The Building News, February 10, 1871. “THIS church, consecrated in November last. It was with the exception of tower and aisle walls been entirely rebuilt. The space formerly occupied by the old chancel is now included in th o nave, and the south aisle has been extended one bay ; the original window at east end of same having been re-inserted. A new chancel, organ chamber, and vestry have been added.

The tower is a square embattled structure of stone, built in the reign of Henry VII., and contains a peal of live bells. From the level of tho gutter project short grotesque gargoyles ; and two empty niches, probably once containing figures of the Virgin Mary and S. Alban, occupy prominent positions above the doorway. The initials R. H. and M. R. D. on shields below the niches have given rise to antiquarian controversies. Inside, the tower is open to the church, but a screen has been fixed under the arch, to conceal the bellringera from the view of the congregation. The tower window is filled with stained glass by Messrs. Lavers, Barrand, & Westlake. Tho window also at west end of south aisle is filled with stained glass by Messrs. Clayton & Bell.

The nave is divided from aisles by four arches springing from piers with moulded caps. Tho roof is supported by three principals, which, with the rafters, are of varnished pitch pine. The nave roof has been raised about 10ft. from those of the aisles, and the intermediate walls have been pierced with clerestory windows. The windows of aisles have been thoroughly repaired, and new lead lights inserted. The old box pews have been replaced by open ones, which will accommodate about 500 persons. The whole of the interior walls are of stone. The font and pulpit of stone are special gifts.

The new chancel is well raised, and paved in the centre with encaustic tUes. Preparations have been made for the erection of a reredos. The east window, by Hardman, has amemorial to the late Rector, and illustrates the Crucifixion and scenes in connection therewith. In a window in the south side of chancel, the stained glass which was formerly m the old east window is replaced. It contains a representation of S. Alban, and the arras of Lord Dudley, who was executed for high treason in the reign of Henry VII., and who held the manor at that time. The new south porch was the gift of a parishioner, and is framed with strong oak timbers, the beams and Barge-boards being carved. The windows have painted glass in them.

The whole of the roofs are covered with green
Langdale slates. The works have been well carried out, at a cost of 1,500, under the direction of Mr. John Douglas, architect, of Chester, by Mr. George Woollam, builder, of Tattenhall.”