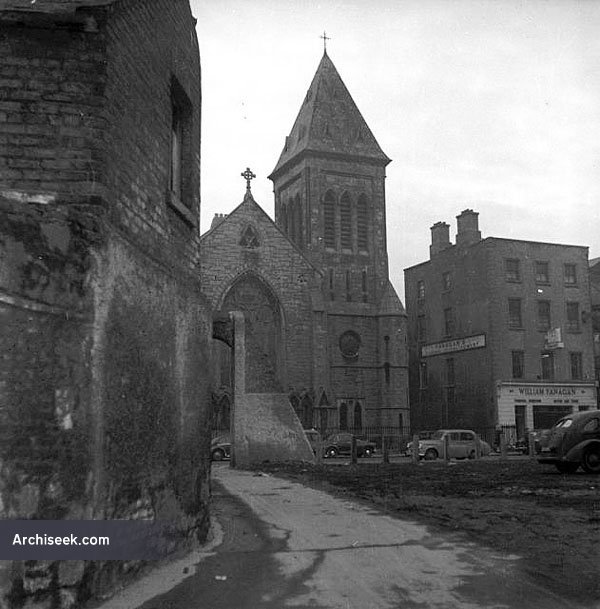 A rebuilding of an earlier church from 1752. Described as a restoration at a cost of nearly £7,000, retaining only the nave walls of the original church. The earlier church was described in 1837 as “The church or chapel of St. Kevin is a plain edifice, in the form of the letter T, situated to the south of Kevin-street; it appears to have been erected on the site of an ancient chapel dedicated to St. Kevin.” At the time it was the largest Church of Ireland parish church in Dublin. It closed in 1950. The church was demolished in 1983.

“The proposed alterations and additions to St. Peter’s parish church consist of a new transept on the south side, to correspond with that on the north. The floor of the church, which is at present 2ft. Gin. under the level of the street, will be raised to 6in. over it. All the galleries will be removed, and new windows throughout the church substituted for the present ones. The lath and plaster ceiling will he removed, and the wood work left exposed to view. The inside of the roof will be sheeted, and the principals planed and ornamented, and all stained in imitation of oak. The transepts will he separated from the aisles by triple arches, springing from shafts of polished Aberdeen granite. The organ will he removed to a chamber which will be next the chancel, and placed on a level with the floor.

The present very unsightly front will be taken down, and replaced by a very handsome one, with a large five-light traceried window, projecting buttresses, &c. On the north side will he placed the tower, which rises in three storeys to the height of 102 ft., and is 20 ft. square, and will contain robing room, belfry, and an apartment for clock. The front will be built of uncoursed granite ; string courses, mouldings, and ornamental work, in Bath stone. On the south side is placed the public vestry, and on the north and south side are the entrances to the church and galleries in transepts. There will also be an entrance at the west end, leading into Peters-row. The present old square pews are all to he removed, and replaced by seals, arranged so that the congregation will face the clergymen ; the seats will have handsomely-carved bench ends, and the seals, pulpit, and reading-desk, will be of pitch pine, stained and varnished.

The floor of the chancel will be laid with Minton’s encaustic tiles, aird the chancel railing will he of wrought iron of a very novel and handsome design. The style adopted is the Early English Gothic of the fifteenth and sixteenth centuries, and it is expected the cost will not exceed from £-2,500 to £3,000. E. H. Carson, Esq., Architect, Harcourt-street.” The Dublin Builder, May 1 1864.