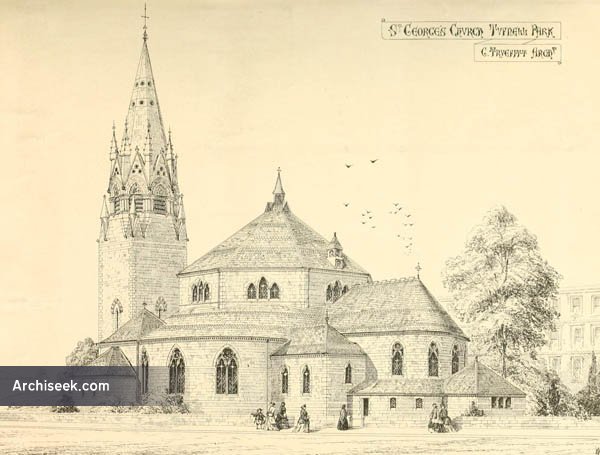 Constructed for The Free Church of England, later dissenters from Anglicanism. No longer in use as a church, but converted into a theatre. The illustrated tower and spire was never constructed.

From The Building News: “THE church, as illustrated on another page, is being erected from the designs of Mr. George Truefitt, architect, of 5, Bloomsbury-square. We are glad to lay it before our readers because it is so entirely different to the many churches erected, and which are all so very much alike. The difficulty the architect had to deal with was to get the building at all on such a sharp triangular piece of ground, but the way he has done it shows he does not believe that a church must of necessity be of the usual nave, aisle, and chancel type, about which there is perhaps really no design whatever. In this church the interior effect has been principally thought of, and as a building partaking of the circular plan always looks externally smaller than it really is, so the interior, which in this case is very spacious, surprises all who enter, as it seems so much larger than it appears from the outside view. There will be sittings for 1,020 adults, without galleries, the cost £5,400, being without the tower and spire, which it is hoped the heir to the estate will build when he comes of age. The site is presented by the Tufnell Park estate, the subscriptions coming principally from the seatholders of the temporary church, but, as only about half of the money has been collected, the building is now stopped for want of funds. The indefatigable treasurers are at work, however, and hope to see the building finished before long. At present the roofs are all on and slated. The materials are Kentish rag and Bath dressings ; the columns, of cast-iron, ten inches in diameter. The roofs, which are open, are .ill rough from the saw, without stain or varnish, and are boarded and tongued with iron. The pewing will be varnished, the seats being all open. The chancel and passages will be all laid with cement or concrete, ready for future tiles. The walls, as at present .arranged, will be plastered to a height of six feet only, leaving the rest to be done at a future time — in fact, everything is being carried out with regard to economy, as far as the fittings and finishings are concerned, so that the architect’s original estimate of £5,400 may not be exceeded. The builders are Messrs. Carter and Sons, of Hornsey-road.”