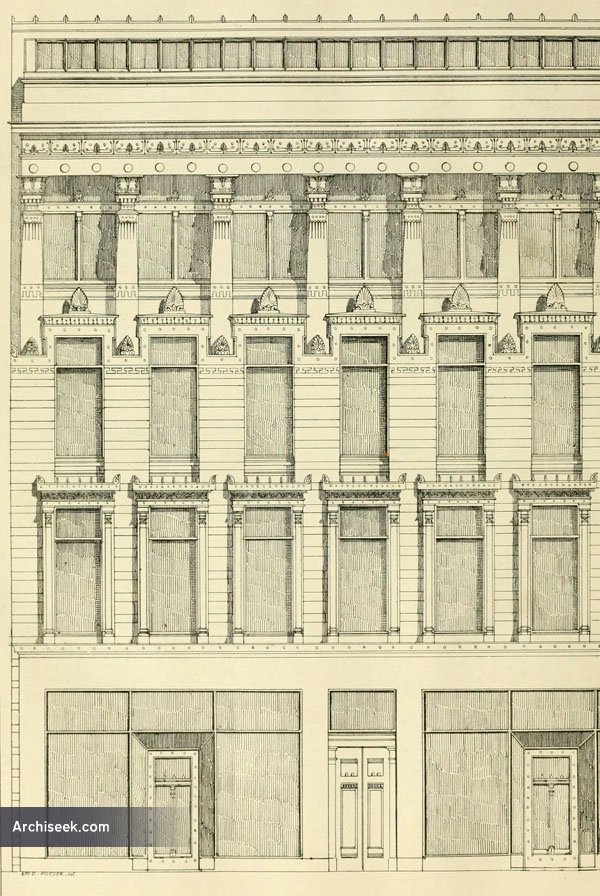 From The Building News, May 31 1872: “One of our illustrations this week is of a house in Bath-street, Glasgow, which was built about twelve years ago by the late Mr. John Cairney, glass- stainer, and from designs by Messrs. Alexander & George Thomson, architects in that city. Bath-strcet is a quiet thoroughfare in the north-west part of Glasgow, having in its east end a few places of business and in its west such mansions as that in which Lord-Provost Lumsden entertained the Prince and Princess of Wales. The building illustrated is in the former, and was planned for (generally) shops and counting-houses, and a workshop and warehouse for the proprietor’s own use. The site being on a ravine (the course of S. Enoch’s Burn) gave an opportunity for two stories below the level of the street, and in the lowest were constructed Mr. Cairney’s kilns and furnaces. The building faces the south in a 6Oft. wide street, and is supported on the east by the Mechanics’ Institution, a building erected about the same time from competition-designs by Mr. Salmon, and on the west by a business-purposed tenement, and also of about the same date from a design by Mr. Baird. The style is that peculiar variety of Greek which the Messrs. Thomson may be said to have created, and by which they have achieved a not only high but widely-spread reputation. The building is now the property of Messrs. Rowley & Dick, oil-merchants, by whom it is partly occupied.”