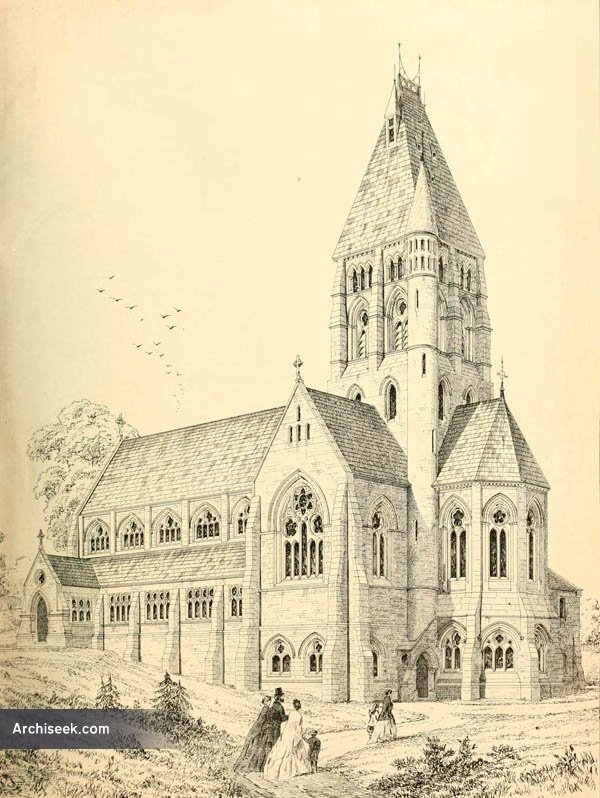 Designed by Samuel Sanders Teulon and he considered it the best of the 114 churches he designed, calling it his “mighty church”. From 1864 to 1867 funds were raised, the projected cost was estimated as £7,500 – the final sum was actually £27,000. Work began in January 1869, and it was fully complete by 1870. With concerns on structural grounds, maintenance costs rising and its congregation declining, it was closed for worship in 1977.

When Teulon was first offered the commission, he had particularly requested that the church should be built of brick. For the exterior, he chose brick from Dunstable, which when new was described as varying in colour from pale grey to Indian red giving the church a mottled appearance. The decorative stone bands on the exterior were of Kentish Rag from Maidstone and as if to contrast the exterior, the inside walls were faced with grey, tallow and white bricks from Huntingdonshire laid in stripes and panels.

From The Building News: “This church, which is to be erected on a site called “The Green” Hampstead, is com- posed of a nave 90ft. long by 26ft. broad, north, and south aisles and transepts, and a capacious chancel, capable of accommodating a large choir, extending, as it does, under the tower. This chancel is to be groined. Advantage is taken of the fall of the ground to construct a chapel underneath the chancel, to be used for small week-day congregations. The church is to accommodate about 1,000, and the chapel 150 persons. The architect is Mr. S.S. Teulon, of Craig’s-court, Charing-cross.”