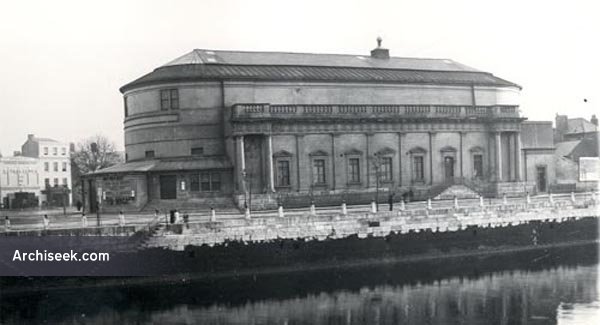 The building, originally called ‘The Athenaeum’, was finished by early 1855. It hosted its first performance on 29 January 1855, a concert in aid of the Blind Asylum. It was officially opened by Tthe Lord Lieutenant, George Frederick Howard, the Earl of Carlisle, in 23 May 1855, with Nationalist members of Cork Corporation protesting the choice of the Lord Lieutenant to perform the official opening.

Built by the trustees of the ‘Royal Cork Institution’ at a cost of £6,000, or the ‘promotion of science, literature and the fine arts, and the diffusion of architectural knowledge’. It was to be used for the purpose of lectures, meetings, and experiments and for the formation of a museum and the collection of fine arts in connection with such subjects. It was also to be used for balls and other assemblies and sometimes for concerts and was equipped for theatrical performances. It was never a success. The acoustics were widely held to be terrible

The Athenaeum was renamed ‘The Munster Hall’ in 1875 and renamed the Opera House in 1877 after extensive reconstruction. C.J. Phipps of London, who was then responsible for about twenty theatres, including the Gaiety in Dublin was commissioned to design the Cork Opera House, which he re-designed and re-equipped as a theatre proper. The Opera House was destroyed by fire on 13 December 1955.