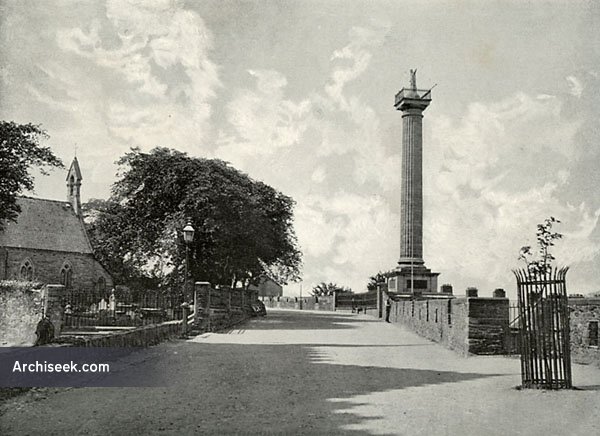 The former Walker’s Pillar was a memorial to Rev. George Walker, the rector of Donaghmore, Co. Tyrone, who came to Derry prior to the Siege of 1688-89. He was quickly appointed co-governor, along with Major Baker, and inspired the blockaded citizens to endure much hardship during the Siege.

The pillar was 90 feet in height surmounted by a statue “of heroic size”, close to nine feet tall, by John Smyth. The column itself was completed in August 1828 at a total cost of 4,200, including 100 for the statue. The inscription read “This monument was erected to perpetuate the memory of Rev. George Walker who, aided by the garrison and brave inhabitants of this city, most gallantly defended through a protracted siege, from the 7th December 1688 to the 1st August following, against an arbitrary and bigoted monarch, heading an army of upwards of 20,000 men, many of whom were foreign mercenaries, and by such valiant conduct in numerous sorties and by patiently enduring extreme privations and sufferings, successfully resisted the besiegers and preserved for their posterity the blessings of civil and religious liberty.”

The cost was defrayed by members of the “Apprentice Boys and friends” and included a donation of 50 guineas from The Honourable The Irish Society and 50 from Londonderry Corporation.

Not universally liked, The Dublin Builder remarked in 1862 “Of the other public buildings – inside the wall – there is a little occasion for comment, except as regards ‘the Walker’ monument – to the gallant Governor and Divine of siege celebrity – that for this or any purpose our previous antipathy to single tall columnar structures with a diminutive figure perched on its non-entablatured head was, in regarding this, fully confirmed”. 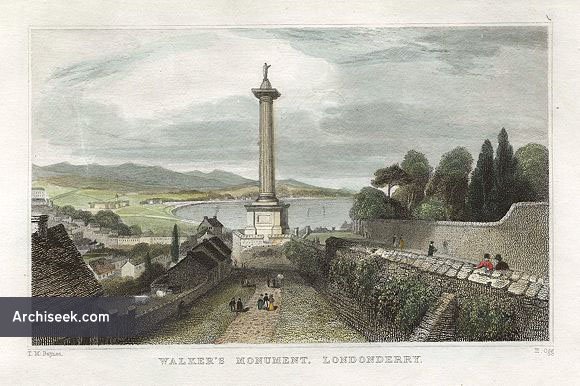 Internally a spiral staircase of 105 steps (the siege lasted 105 days) allowed access to the viewing platform on top. The pillar and statue were destroyed by a bomb explosion in August 1973. Only the pedestal remains to this day. A new statue of Governor Walker, incorporating a leg from the original statue, now stands in the Walker Memorial Garden next to the Apprentice Boys Memorial Hall