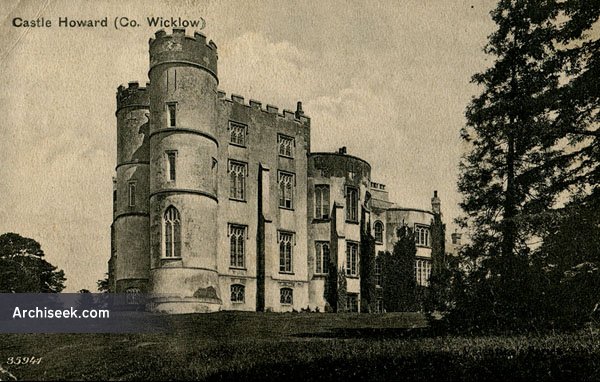 Built 1811 around the fabric of an earlier house. The house is designed part in Romantic Castle style and part in Abbey style. Described by Mark Bench-Jones as “a romantic early 19th century castle rising from a wooded hilltop above the Meeting of the Waters”. The castle section is articulated with three-stage towers and battlemented parapets while the abbey section is two storey with gothic tracery windows and a battlemented parapet. Also formerly known as Cronebane Castle.

From: J.P. Neale, Views of the seats of Noblemen and Gentlemen in England, Wales, Scotland, and Ireland, vol.III, London, 1820
“This picturesque and charming Residence is situated in the Vale of Avoca, County of Wicklow , on a very commanding spot, imme diately above what is called the “ Meeting of the Waters. ” It be longed originally to a Company who undertook the working of the Copper-Mines which are in its neighbourhood, who erected on it a very ordinary description of House, in which the person , who had the direction of the Mines, resided. In 1811, it was purchased from the Com pany by the present Proprietor, who determined on enlarging and im proving the House ; and having consulted Mr. Morrison , designs were formed and approved, and the Building, as represented in the annexed engraving, is now entirely completed. The idea is that of an Abbey and Castle, to which the situation is peculiarly appropriate. The interior of the House is spacious and commodious, and very considerable ingenuity is exhibited in reconciling the necessary conveniences and most approved arrangements of a modern plan, with the irregularity of out lines requisite to such a Building. Other improvements have also been made to Castle Howard, since it came into the possession of the present Proprietor. Amongst those, a new approach to the Castle has been executed with considerable judgment; to connect which with the public road , a Bridge of a single Arch has been thrown across the River, in a well chosen situation . But we regret that the same good taste which directed the other improvements, was not consulted in this. An Arch of a very unsightly appearance, crowned with a Lion, discordant alike with the Castle to which it forms the approach, and with the scenery which environs it, has been lately erected on this Bridge; and though doubtless intended as an embellishment, its effect is highly injurious.